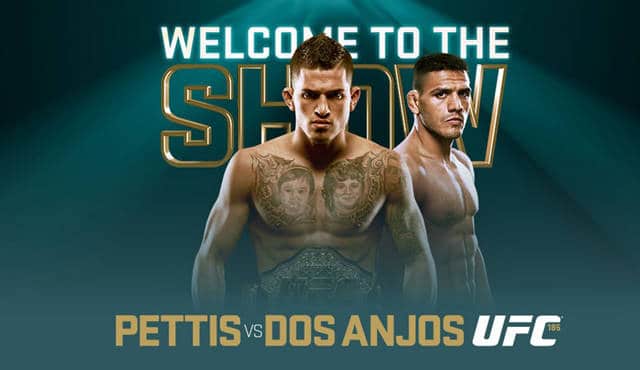 The UFC will return next Saturday night (March 14, 2015) with the blockbuster UFC 185 pay-per-view (PPV) card from the American Airlines Arena in Dallas, Texas.

After nearly 15 months off, “Showtime” will defend his belt for the second time in just over three months following his second round submission of former Strikeforce 155-pound champ Gilbert Melendez at last December’s UFC 181.

Dos Anjos has been on fire in his own right, knocking out former champion Benson Henderson and dominating Nate Diaz in his last two bouts. Check out the Countdown to UFC 185: Pettis vs. Dos Anjos video right here:

Esparza has been vocal recently about the lack of promotion for the 115-pound championship, which was unveiled last December when Esparza beat Rose Namajunas in The Ultimate Fighter (TUF) 20 Finale to win the belt.

Meanwhile, Jedrzejczyk beat Claudia Gadelha via highly controversial split decision to get a shot at “The Cookie Monster.” Here is the Countdown to UFC 185: Esparza vs. Jedrzejczyk video:

Also on the main card, former welterweight champion Johny Hendricks will look to rebound from his razor-thin UFC 181 loss to Robbie Lawler by defeating gritty Matt “The Immortal” Brown.

Ironically enough, both fighters will come in off of a loss to Lawler, as Brown dropped his most recent bout to “Ruthless” at last July’s UFC on FOX 12.

The winner will find himself nearing title contention in arguably the most stacked division in all of UFC, making this a pivotal bout to say the least. Watch Countdown to UFC 185: Hendricks vs. Brown below: