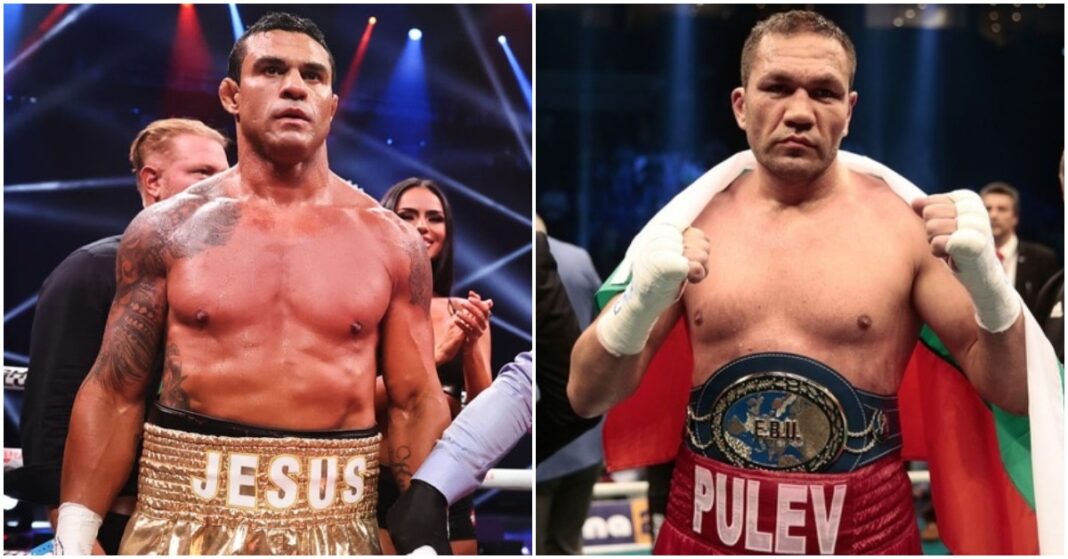 Vitor Belfort has been accused of ducking a fight with Kubrat Pulev.

The Bulgarian, who is now set to face Frank Mir at Triad Combat on November 27, was originally aiming to fight Belfort in an attempt to get revenge for Evander Holyfield who was recently stopped by ‘The Phenom’.

“Belfort realised he was going to fight a real heavyweight, in shape and capable. So I’m sure he did some maths, and coming off the victory against Holyfield, I don’t think he wanted to get smashed, because that’s what Kubrat was going to do, he was going to get a little revenge here for the boxing world,” Pulev’s promoter Ivaylo Gotzev told Betway.

“I believe Belfort came to the realisation that he was going to have to fight a real heavyweight. Vitor, although he fought in the heavyweight division, he is a smaller guy and I believe he backed out, whatever his reasons were. All I know is he backed out and Frank Mir has stepped in, another southpaw but a big one, a true heavyweight and former UFC champion that should make for a good scrap with the new rules.”

“Junior Dos Santos was also mentioned, and he backed out, Vitor Belfort was mentioned and he backed out, Fedor Emeilianenko has just made a comeback but I believe he has a relationship with Bellator. But we want to try out Triad and fight a big man like Frank, we’ll then see where we go from there, we’ll look for the top MMA fighters and carry on with that.”

Belfort is expected to return to the boxing ring in the first few months of 2022.

According to his trainer, Derik Santos, the former UFC champion is unlikely to reschedule a fight with Oscar De La Hoya

“It’s likely Vitor will return in the first quarter of next year,” Santos said. “I see Vitor being busy for another year then he’ll probably re-evaluate. I think after a year he’ll move onto new chapters of his life.”

“We have not heard from Oscar De La Hoya, I don’t think we’ll see Oscar back in the ring,” Santos said. “We know he had a problem with Vitor’s rehydration clause. I really think there were some issues there and the writing was on the wall in terms of that fight falling through. I don’t think Oscar was ever training like he said he was training.

Santos also ruled out a fight between Belfort and Haye for very different reasons.

“David Haye is a tool,” Santos said. “He has nothing to talk about. He’s disappointed British fans on more than one occasion. He went 12 rounds and did nothing with a supposed broken toe, not throwing any other punch but a flinging jab against Klitchsko. He fleeced everybody with Klitschko. And then had the nerve to come out here with Fournier, walk around with his buddy and get paid for that, and then call out Tyson Fury. He’s a tool.

“Nobody over here cares about David Haye at all. They all think he’s a tool. Most people here can’t stand him. He has no idea what he’s talking about. He has no idea how hard Vitor Belfort trained to get back. He’s irrelevant. His fight with Fournier was a total farce of a fight. For that reason I’d want nothing to do with anything that puts a ton of money in David Haye’s pocket. I rule him out for Vitor’s next fight. He’s irrelevant, nobody cares about him here, there’s no interest in that at all.”

Do you think Vitor Belfort ducked a fight with Kubrat Pulev?