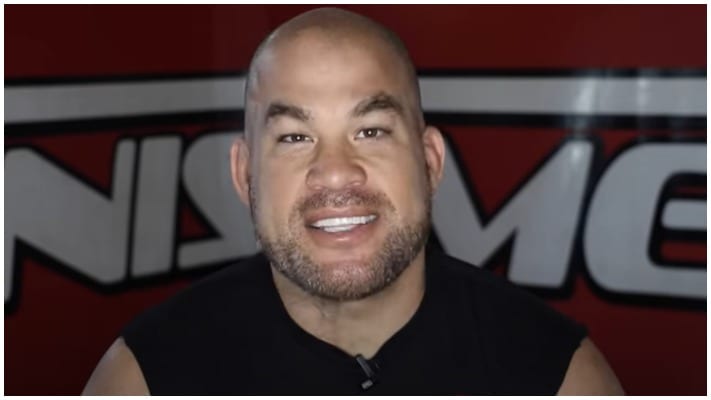 Former UFC light-heavyweight champion Tito Ortiz has released a video to help promote his potential fight against boxing legend Mike Tyson. ‘Iron Mike’ recently announced his intention to return to the ring for a few exhibition bouts. The 53-year-old appears to be in tremendous shape based on the video footage he has released ahead of his comeback.

The former heavyweight world champion hasn’t been short of potential opponents for his comeback. Long-time rival Evander Holyfield has announced he will be returning to the ring at 57 years old. While MMA fighters have been lining up for a shot at the fight legend. Andrei Arlovski and Ken Shamrock have offered to take on Tyson. So has Ortiz and his call out got the most attention from fight fans and the man himself, Mike Tyson.

‘The Huntington Beach Bad Boy’ took to social media to last week to call out Tyson posting a photo of both men that was captioned. “@MikeTyson – Legend Vs Legend on PPV! When are we doing it? Just so you all know I was called for this fight. What if someone called you , “would you fight Mike”? Me,”YES”!”

Ortiz faced ridicule from a lot of people in the MMA world including former opponent turned MMA analyst Chael Sonnen who sounded off on Ortiz on his YouTube channel. Tyson though seemed to take the call out seriously and responded to the Ortiz fight offer during an interview with TMZ. He seemed pretty open to taking on the MMA veteran in a charity fight, he said.

“I don’t really know but listen — anyone that’s willing to contribute to this charity, they’re welcome to come in and challenge me. I would be open for anyone.”

Ortiz who is riding a three-fight win streak has clearly taken that Tyson’s comments seriously. So seriously, he has put together a promo video to hype up a fight. And just a heads up, it’s over eight minutes long! Check it out below….

Do you think Tito Ortiz has any chance of being chosen to face Mike Tyson in his boxing comeback?