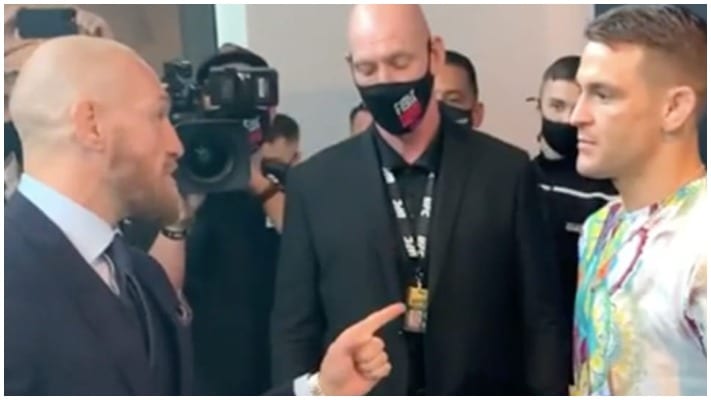 McGregor suffered a shock second-round knockout loss to ‘The Diamond’ at UFC 257 on Saturday evening. Poirier wrestled early before brutalizing ‘Notorious’ with calf kicks. In round two Poirier put his hands together to become the first man to KO/TKO McGregor in MMA.

The two men, who have been cordial during the build-up to UFC 257 met backstage at the event and immediately starting talking about a third fight – McGregor previously beat Poirier at UFC 178 in 2014.

‘We’ll do it again,’ McGregor said with a smile as he shook Poirier’s hand. “I seen you were trying to check them”, Poirier responded referencing his heavy leg kicks. That’s what I told Brett Okamoto, when I felt you checking that way and I was still getting the muscle.”

McGregor then explained that he could hear leg kick specialist Thiago Alves talking up Poirier from the corner during the fight and admitted he couldn’t help but admire the work himself.

“I heard Thiago Alves [Poirier’s trainer] goes ‘that one was a good one’ and I was like “you b*****d”. I’m very happy for you Dustin, you’re a f*****g warrior. You’ve got passion, courage everything it takes to get in after the first fight,’ said McGregor.

Poirier concluded the conversation by referencing something McGregor’s coach had said in the build-up to the fight and insisting he had forgiven himself for previously losing to the Irishman.

“Your coach was right, I can’t forget [the first loss to McGregor] but I can forgive myself and I have,” Poirier said. “I am honoured to share the octagon brother and we will do it,’ McGregor replied as both men wished each other well on their travels home. (Transcribed by Extra IE Sport)

Do you want to see Conor McGregor vs. Dustin Poirier III?