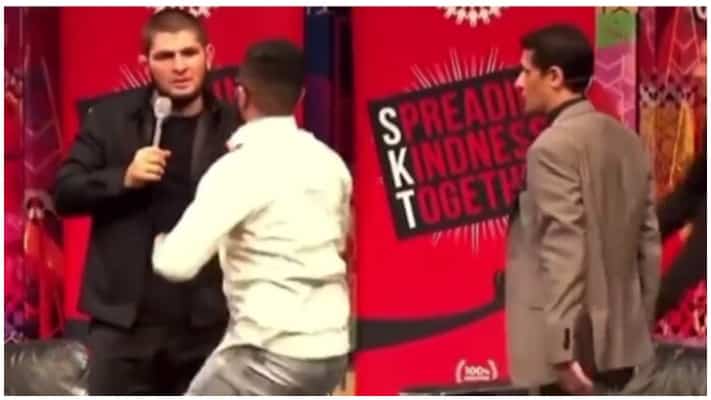 Khabib Nurmagomedov was as calm as could be when a fan charged at him while giving his final thoughts at a public appearance.

Taking a charge at Khabib Nurmagomedov may just be the dumbest thing an individual could possibly do. Khabib is 29-0 against some of the most dangerous fighters in the world and has even trained against a cub as a young child.

Khabib also said, “Guys, I come from other part of world here to see you guys and you know, I think I deserve some respect too. Thank you. Around the world I have big, big support from my people who have same views like I have and I really believe here we have same views and please, take care of your kids. This is our future. This is most important. Thank you guys.” (MMANews)

Khabib could have easily put the charging man into a coma if he wanted, but he was obviously in a very forgiving mood as he just patiently asked the guy not to do anything stupid. Khabib has been making a lot of press runs and has been talking to the media more in his retirement. He was last seen at a sports festival where GSP pretended to put the undefeated fighter in a headlock.

Khabib continues to show that he is the same person in real life, that we have come to love from watching him from the outside of his life. The former champion showed restraint in this situation in which many that possess his talents would not have.

Do you think Khabib Nurmagomedov handled this situation well?