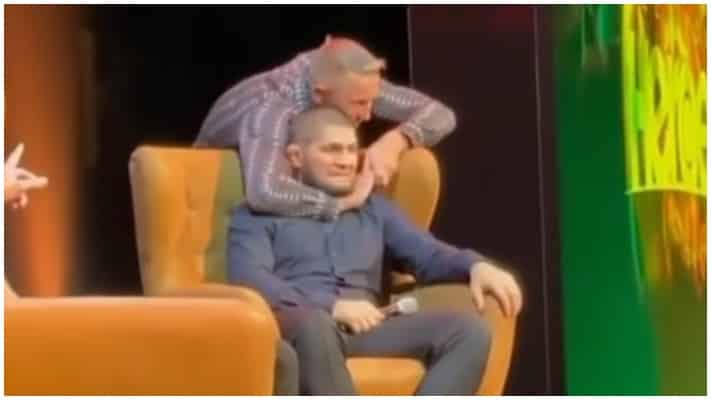 Georges St Pierre (GSP) and Khabib Nurmagomedov were both in attendance at the Arnold Sports Festival in the United Kingdom yesterday. At this event, fans and admirers of the two UFC greats got to meet and interact with them both, a dream for many combat sports fans.

Whilst Khabib was being interviewed on the stage, GSP surprised him by playfully putting him in a rear-naked choke while the Russian was talking to the host of the festival. Both former UFC champions seemed genuinely happy to see each other.

“I told his team, I said ‘listen, I’m gonna slide behind him like a ninja and it’s gonna be my turn to get him this time,” GSP said at the festival. Man, listen to me, you’re as close to a perfect fighter that anybody can be. Perfect ever, undefeated. You finished your career on top of your game and for that man, it’s never been done and it’s amazing and it’s all to your honor.”

The much-touted super fight between the two sadly never materialized, although it was truly a dream match for many MMA fans. However, the two former champions playfully faced off on the stage at the event.

Khabib reiterated to the delighted fans in attendance that “Rush” was his late father, Abdulmanap’s favorite fighter and that Khabib had grown up watching the former two-division champion ply his trade against the very best the UFC had to offer.

‘The Eagle’ also revealed to the fans in attendance that his contract from the UFC was offered just 10 days before he was scheduled to fight a Brazilian fighter in Dagestan. Nurmagomedov told his father that he did not want to fight the Brazilian, as he had finally achieved his life’s dream of obtaining a UFC contract. However, his father insisted on him seeing the fight through, and Khabib credited his father’s advice of fighting anybody in the world in order to become a champion as helping him become the world-renowned fighter he is today.

Who do you think would’ve won if GSP and Khabib squared off inside the Octagon?