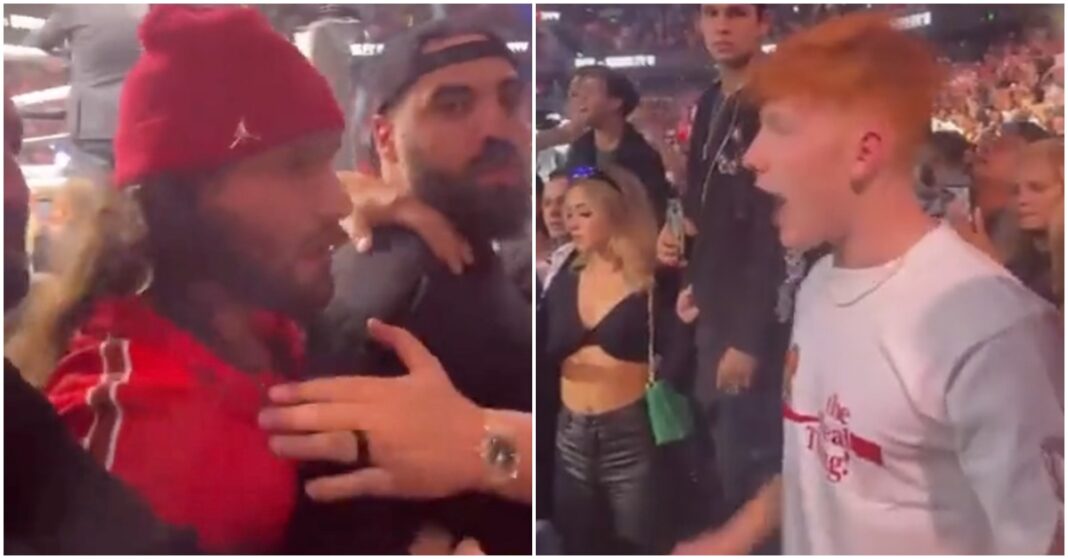 Jorge Masvidal almost got into it with a 17-year-old fight fan who thought it would be a good idea to push ‘Gamebred’ whilst he wasn’t looking.

The BMF titlist was in attendance at the Amalie Arena on Saturday night to watch Jake Paul improve his professional boxing record to 5-0 by spectacularly knocking out Tyron Woodley.

At some point during the event, a fan decides it is a good idea to push Masvidal while his back is turned. Of course, the UFC fighter didn’t take it too well and tried to go after the youngster who instantly began to plead for forgiveness.

Masvidal’s manager took to social media to explain why this altercation took place.

“Kid decides to push masvidal while masvidal was facing the ring,” Abraham Kawa wrote. “Quickly realizes that’s a big no no when masvidal turns around and starts screaming “I’m 17, please I’m 17” with his hands up. Kids I tell you smh”

Jorge Masvidal Received A Call Out From The Nights Big Winner

Post-fight, Paul sent a plea to Dana White to allow him to fight some of the biggest stars in UFC.

Masvidal was part of a four-man list of fighters the YouTuber was hoping to face inside the boxing ring.

‘Gamebred’ is of the opinion that Paul cannot afford his purse and instead advised the former Disney actor to sign a one-fight deal with the UFC.

“You can’t afford me to come over. So, let me tell you a little secret about me then though, I fight for money or I fight the best in the world. You’re neither, you understand? I know it hurts… I’ll tell you what? Come on over to the UFC, sign on one-fight deal, let Dana [White] give you whatever the f**k he’s gotta pay you, I’ll break your jaw in front of the whole world, man. I promise you that. If you really want it, come get it.

Do you want to see Jorge Masvidal vs. Jake Paul?