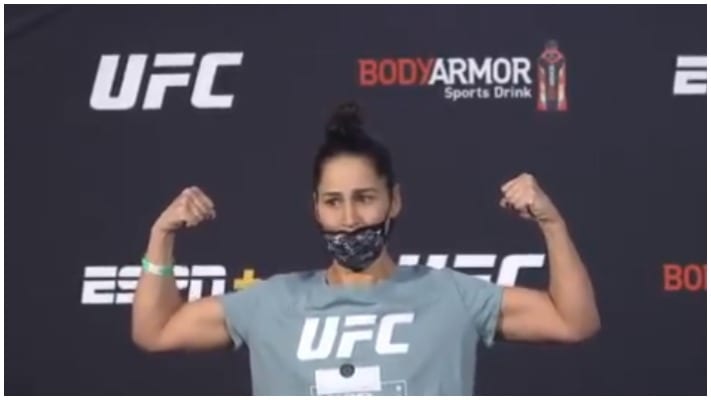 As you can see from the video below Eye had a pretty tough weight cut and needed to strip down in order to get anywhere near her contracted weight. The former title challenger then posed for media but can be seen visibly shaking, as Eye stepped off the scale she said. “I don’t think I can stand, guys. I’m sorry.”

Eye scored a big win over Viviane Araujo in her last fight but also missed weight. On that occasion Eye missed the flyweight limit by 5lbs. Speaking to LowKickMMA last week Eye revealed the reason for her failure to make weight and assured it wouldn’t be an issue against Calvillo, she said.

“It’s unfortunate. I’m a female and I have a menstrual cycle that I can’t get away from. But I did miscalculate things while being on that on fight week. I’ve had that problem before in the past and it’s never stopped me from missing weight but somehow it stopped me from making weight this time. It’s something I don’t surely have to deal with this time and I’m going to make sure it isn’t a problem moving forward.”

Eye is looking to make it two wins in a row since suffering a huge KO loss at the hands of flyweight champion Valentina Shevchenko. The 33-year-old is still ranked number one in the division and seems to be on the cusp of another title shot – although missing weight twice in a row could mean she moves back up to bantamweight sooner rather than later.

Do you think Jessica Eye should move back up to bantamweight after this latest weight miss?