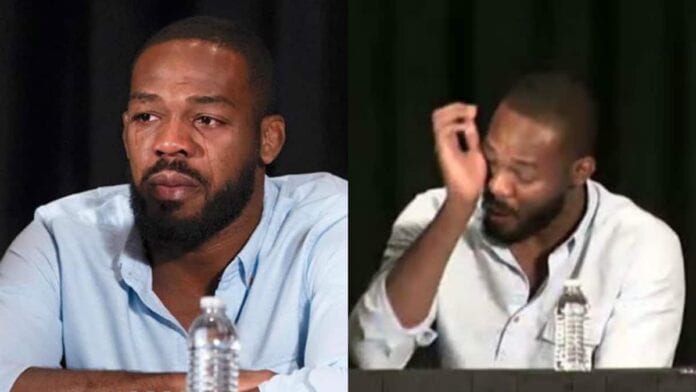 His UFC 200 light heavyweight title unification bout with Daniel Cormier in the main event of this Saturday night’s (July 9, 2016) blockbuster event from Las Vegas may be ruined, but interim light heavyweight champion Jon Jones let the world know that he’s sorry for failing a USADA drug test and will fight the accusations in a short press conference from Las Vegas today.

Suggesting that a tainted supplement could be to blame for his failure, Jones laid out his apology for his fans and his employers, while his manager Malki Kawa laid out some brief details of the course of action they’re planning to take in order to clear “Bones'” name.

For what it’s worth, Jones, who has routinely been accused of being a less-than-genuine person, appeared genuinely distraught and emotional as he was driven to tears while discussing the sticky situation in this short video snippet from today’s presser courtesy of Fancy MMA. Check it out:

During the segment, Jones revealed that while he had not spoken with UFC President Dana White, he had spoken with UFC CEO and co-owner Lorenzo Fertitta, to apologize for the massive windfall:

“I have not talked to Dana White yet, but I would like to. I talked to Lorenzo Fertitta and I told him I would never cheat. I pride myself on my work ethic and I just apologized to him.”

As for his upcoming fight with USADA, Jones said his team was going through every supplement he had taken in order to learn more about the banned substance he was pulled off UFC 200 for supposedly taking:

“There’s a few things that have nothing to do with performance that I’ve tried. And, like I said, whatever it is, I can’t even pronounce it, I’ve never even heard of it, so I’m learning about it myself. Right now I’m just going through and thinking everything I’ve taken leading up to the fight, and we’re going through a process of getting everything figured out.”

It’s worth noting that “Bones” did appear genuinely bad about his forced withdrawal from UFC 200, but that won’t save UFC 200, the onetime historical event that will always carry an asterisk from this massive mess that threatens to overshadow three straight nights of incredible martial arts action.

Are you buying Jones’ explanation?