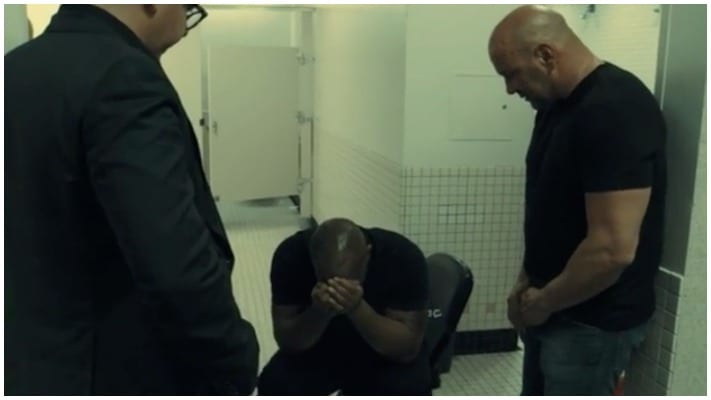 The emotions always run high when Daniel Cormier loses and UFC 241 was no different.

Cormier was dominating Stipe Miocic for much of their heavyweight title headliner earlier this month. However, Miocic started going after the body of “DC” much more in the fourth round and it paid dividends. He eventually finished Cormier to regain his heavyweight title.

For Cormier, it was just a second official loss in his career and while he didn’t cry like before, the defeat was still hard to take for the former heavyweight champion. A new video has surfaced showing Cormier backstage with his family with UFC president Dana White consoling him:

“I was winning the fight on all the cards,” Cormier responded. “On every f*cking card I was winning. I was winning all three rounds on two of them. I’m a f*cking idiot.”

“Why are you an idiot?” White asked. “Listen man, Stipe came to f*cking win. That dude was in great shape, he kept coming forward, you kept coming forward. You don’t see heavyweight fights like that where two f*cking monsters just keep coming forward and f*cking blasting each other the way that you were. It was an incredible fight. I know how you are and how competitive you are. You’re the f*cking man, dude.”

After White left, Cormier had his face in his towel while his family looked on before talking about why his competitive nature is both a gift and a curse:

“I’m a competitive guy. It’s my gift and my curse,” Cormier added. “You know like, by not accepting loss it makes you ensure you won’t do it very often. I think that’s what makes me so good at stuff, but also what makes the emotion run so freely whenever it doesn’t go the right way.”

Cormier then stated he’s open to a rematch but will have to discuss it with his team and family first.

You can watch the whole interaction below courtesy of a Reddit user:

What did you make of the video?