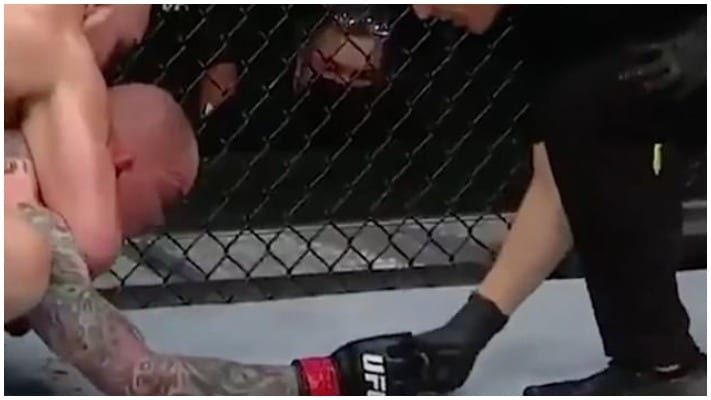 Light-heavyweight Anthony Smith was on the end of a brutal beatdown at the hands of former title challenger Glover Teixeira last night. The pair squared off in the main event at UFC Jacksonville at the VyStar Veterans Memorial Arena.

Smith entered the fight as favourite and lived up to that tag in the early goings. He consistently landed big right hands and it seemed a matter of time before one of them folded his 40-year-old opponent. Teixeira was able to eat all those shots before turning the tide and putting a beating on Smith. From the end of the second round, it was all Glover who was dominating the fight and hurting ‘Lionheart’ every time he landed.

In between rounds, Smith could be heard telling his corner his teeth had fallen out. Despite this he was allowed to fight on before the referee eventually stepped in and waved off the bout in the fifth and final round.

An amazing video has now emerged showing Teixeira reigning down strikes from the back mount position. Meanwhile Smith can be seen handing one of his teeth over to the referee for safe keeping. It really is crazy. Check out the clip below…

Since the event, Smith has confirmed he suffered a long and painful list of injuries during the fight. ESPN reporter Ariel Helwani revealed he had spoken with Smith post-fight before posting the following out on social media.

“Just spoke to Anthony Smith via text. Injuries suffered tonight: Broken nose, broken orbital bone, two missing teeth and a cut under his right eye. One tooth in front and one towards the back, he said. His real teeth.”

The head coach of Smith – Marc Montoya – previously told Brett Okamoto that he believed his fighters veneers had fallen out and this is a common occurrence in training meaning he wasn’t motivated to pull Smith from the fight.

Is Anthony Smith one of the toughest fighters in the UFC today?