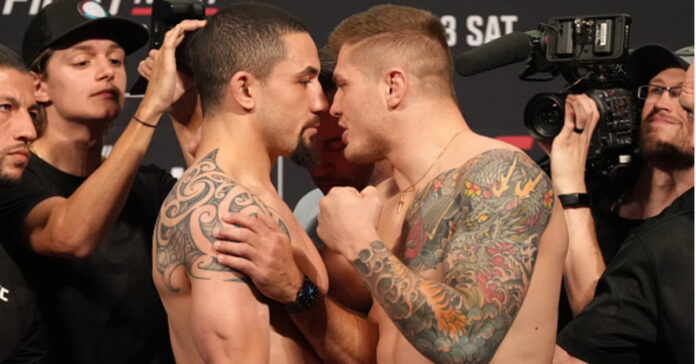 UFC middleweight contenders Robert Whittaker and Marvin Vettori will square off in the co-main of UFC Paris on Saturday.

Both fighters will step into the Octagon in fairly similar situations. ‘The Reaper’ and ‘The Italian Dream’ have more than proven themselves in a competitive 185-pound division, but both could find it difficult to land a title opportunity with a win in ‘The City of Light.’ Whittaker and Vettori have both faced, and lost to UFC middleweight champion Israel Adesanya on two separate occasions. A trilogy bout would be a tough sell, assuming ‘The Last Stylebender’ gets past his next challenger, Alex Pereira at UFC 281 in November.

The two went face-to-face during the UFC Paris weigh-ins. Things got a little chippy when the always professional Robert Whittaker offered his hand to Vettori. ‘The Italian Dream’ acted as though he was going to accept the show of sportsmanship, but instead, pulled his hand away and proceeded to get in Whittaker’s face, trash-talking the former middleweight world champion.

It was nothing new for the No. 2 ranked middleweight who has embraced flamboyance and attitude as he made his way near the top of the division rankings.

No. 1 ranked contender Robert Whittaker expects Marvin Vettori to come out pushing the pace and turning their UFC Paris showdown into a brawl. Even so, ‘The Reaper’ believes he will hold the advantage over the Italian-born striker.