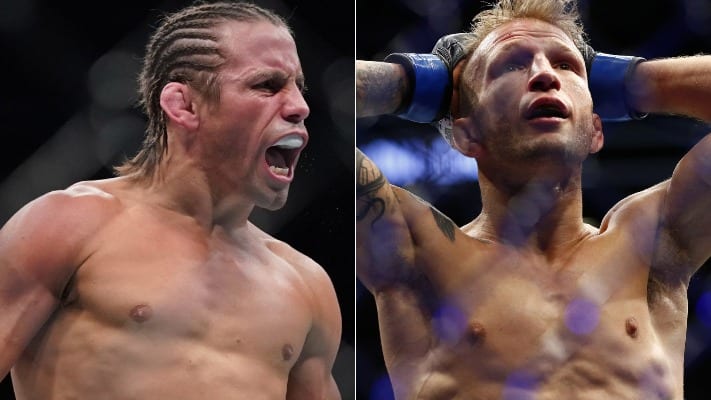 Urijah Faber has his sights set on a bantamweight title bout with Henry Cejudo. However, Faber would also like to step into the Octagon against his former friend and teammate TJ Dillashaw.

Of course, he’ll have to wait two years, as Dillashaw was recently handed a United States Anti-Doping Agency (USADA) suspension for the admitted use of a banned substance. However, as Faber told ESPN’s Karyn Bryant and Tyron Woodley on the UFC Sacramento post-fight show, if you were to write a move about his career, a fight with Dillashaw is a must (via MMA Fighting):

“There’s more opportunity with TJ in the mix to be honest. You want to write a movie? Put that scenario in there,” Faber said. “I’ve been talking about this long before they finally caught TJ for being a little cheat.

“We knew that was coming. By the time TJ returns from suspension, recovering from all this stuff, I’ll be 41 and a half so we’ll see how it goes. I’m not scared to fight, that’s for sure.”

Faber comes off a stunning first-round knockout win over Ricky Simon in the UFC Sacramento co-main event. The victory came in Faber’s first fight in several years after ending an initial retirement. It’s clear “The California Kid” is attempting one more run at the 135-pound title that has eluded him his entire career, before finally walking away from the sport for good.

However, whether or not that run will include an eventual meeting with Dillashaw remains to be seen.

What do you think about Faber possibly fighting Dillashaw upon his return from suspension?