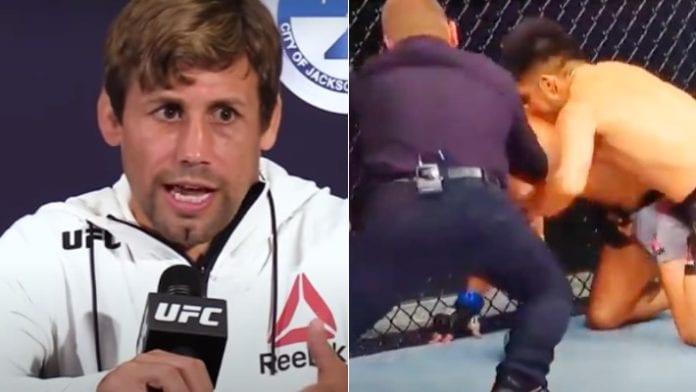 Urijah Faber doesn’t always see eye-to-eye with Dominick Cruz, but he can sympathize with the latter’s frustration about his latest defeat.

Cruz returned to action at UFC 249 last weekend as he looked to reclaim the bantamweight title from Henry Cejudo. However, after getting dropped by a knee and receiving a number of unanswered shots while he was trying to get up, referee Keith Peterson called an end to the contest with just seconds remaining in the second round.

Cruz protested immediately and was not happy with the call. He went on to accuse Peterson of smelling like cigarettes and alcohol after the fight which has drawn plenty of criticism from many in the combat sports world, though Cruz hasn’t backed down from his comments as of yet.

Faber has endured his own problems with early stoppages in the past and believes some leeway should be given, especially in big championship fights.

“The referees are in there to do their job and save guys from taking too much damage,” Faber said during a post-fight scrum at UFC Florida last night (via Bloody Elbow). “But at the end of the day, especially in world championship fights when you’re dealing with guys that are future Hall-of-Famers and multiple time world champions, we want to remove all doubt. We want to know, like, ‘I had no more chance.’

“So I feel for him on that. I feel like he could’ve still had a chance, and that’s always the part that irks you. So I can understand his frustration.”

As for Cruz’s allegation, Faber finds it hard to believe Peterson was inebriated.

“I doubt that Keith Peterson was drunk,” Faber said. “He might’ve been sweating some alcohol and definitely smelling some cigarettes, but I don’t think he was drunk. He was trying to look after Dom.”

That said, he does believe his old rival looked good despite competing for the first time since December 2016.

“I thought he looked good,” Faber added. “You never know how people are ageing, everybody’s different, but he’s got a style that lends to a long career.

“It makes me more and more impressed with Henry Cejudo, what a champion. It’s hard to take him serious sometimes, but you’re forced to when he keeps doing what he’s doing.”

What do you make of Faber’s comments?