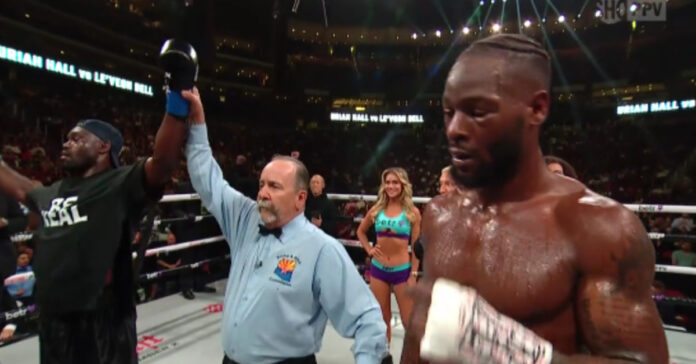 On Saturday night, recently retired UFC middleweight Uriah Hall made the jump from the Octagon to the squared circle on Showtime pay-per-view. The Ultimate Fighter alumni took on another elite-level athlete in NFL running back Le’Veon Bell. Taking a year off from professional football to try his hand at boxing, Bell had a tough first test against the once highly touted UFC middleweight as the two clashed in a four-round cruiserweight bout at Desert Diamond Arena in Glendale, Arizona.

Le’Veon Bell came out as the aggressor in the opening round, spamming a jab to the body. Hall continued to push forward but was hesitant to throw anything until near the end of the round when he landed a solid right that appeared to rock Bell. Hall picked up the pace in the second but still looked like a predator playing with his prey. Hall was flat-footed, following Bell around the ring rather than cutting off his opponent. The crowd grew frustrated as Hall just seemed disinterested in engaging.

Nearing the end of the third round, Le’Veon Bell cracked Hall with a solid right hand that backed up the MMA veteran. Through three rounds, it appeared that Hall landed the more damaging strikes while Bell was the more active fighter. With the fight potentially up for grabs, Hall came out aggressive, throwing combinations and engaging in dirty boxing. Bell looked downright uninspired until the final 10-seconds when he finally let the hands go, delivering a flurry of strikes as the final bell sounded.

Check Out Highlights from Uriah Hall vs. Le’Veon Bell Below: