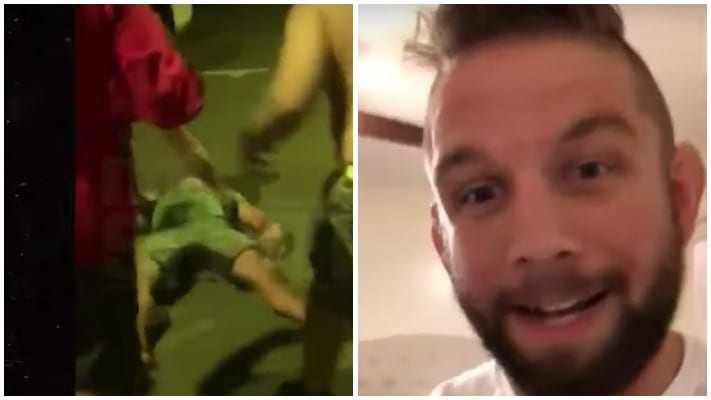 Nik Lentz has offered to help BJ Penn with his recent troubles — but that doesn’t mean he’s not going to put a beating on him when they eventually meet.

Penn was recently in the news after footage emerged of him taking part in a street fight with a civilian in Hawaii. In one of the clips, the civilian even knocked Penn out cold. Such incidents outside the Octagon could put a wrench in the plans for his last UFC fight which is set to be against Lentz.

So how did Lentz react to the footage?

Lentz went on to advise Penn to get out of Hawaii and train at his gym in South Florida so that something worse doesn’t happen next time.

“We’re watching a live train-wreck,” he added. “That’s what we’re watching and we’ve been watching it for a long time. And somebody needs to go in there and stop him before he ends up dead. Who is to say the next guy doesn’t have a knife or a gun or he gets knocked out and he hits his head on the curb and he dies?”

While he has offered Penn help, that doesn’t mean Lentz doesn’t plan on not beating him up either when they collide in the Octagon:

“We can have a little peace offering here,” he continued. “Not only will I beat him up, but I will teach him and I will help him and I will get him out of there (Hawaii), where the cameras are sucking him in, where people are taking videos of him on the street. I’m going to help him more than he’s ever been helped in his life. Now I’m gonna kick his ass for money at the same time, but I’m still gonna help him.”

As for when the fight could take place, Lentz heard murmurs of UFC Boston which takes place on October 18. However, the recent incident could change things.

What do you think of Lentz’s comments?