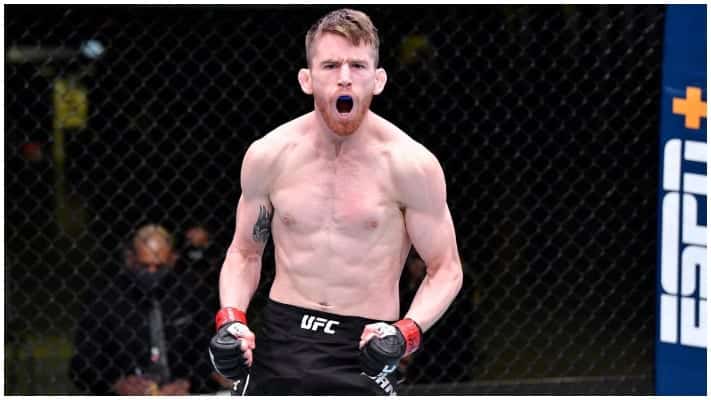 At the top of the card MMA legend, Alistair Overeem was hoping to continue his final UFC title bid by beating Alexander Volkov. Unfortunately for ‘The Demolition Man’ things did not go to plan. Volkov was able to land strikes at will. The heavyweight Russian put a beating on Overeem before closing the show in round two.

Prior to that, we had a bantamweight match-up with title implications. Cory Sandhagen was looking to make it two wins in a row since suffering a tough loss to fellow title contender Aljamain Sterling. Former UFC lightweight champion Frankie Edgar made a successful 135lb debut last year against Pedro Munhoz. A win against ‘The Sandman’ would likely have earned him another shot at UFC gold. ‘The Answer’ unfortunately won’t be getting a bantamweight title anytime soon after spectacularly losing at UFC Vegas 18.

Performance Of The Night.

The first performance of the night went to Sandhagen for his epic flying knee knockout of Edgar. ‘The Answer’ was pressuring well early as Sandhagen circled the cage. He eventually jumped to the flying knee which connected perfectly. Edgar fell face first to the mat in a terrifying scene. Sandhagen makes it two in a row via specular KO after previously landing a spinning heel kick on Marlon Moraes.

Performance Of The Night.

Volkov was the next recipient of $50,000 in bonus money. As we said earlier ‘Drago’ made it look easy against Overeem who despite his age is still a contender at heavyweight. Volkov looked as good as we’ve ever seen him and more than earned his bonus cheque.

Fight Of The Night.

Beneil Dariush and Diego Ferreira was the Fight of the Night at UFC Vegas 18. The lightweight contenders both went to war in a fight highly anticipated by MMA fans. Dariush ultimately eked out a split decision win via the judge’s scorecard, despite many thinking he was the clear winner. Nonetheless, he moves on and can look forward to competing with the best lightweights later this year.

Do you think the right people got bonuses at UFC Vegas 18?