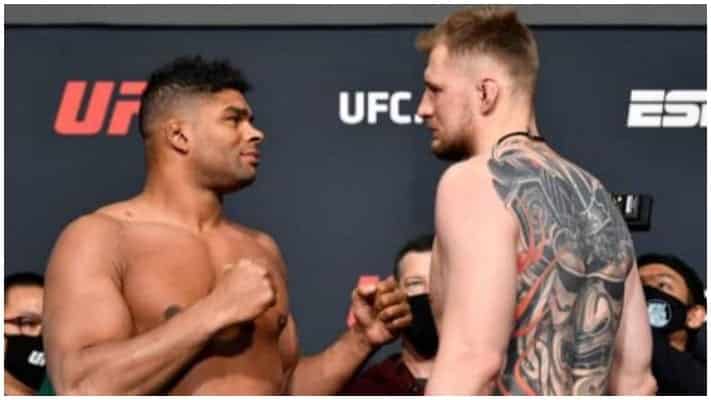 Round 1: Alexander Volkov lands a nice low kick early. Alistair Overeem covers up against the fence allowing the Russian to fires shots off. Both men return to the center. It’s lots of feinting here, especially from Overeem. Volkov lands another low leg kick and follows it up with a straight punch. Overeem finally lets his hands go and lands big punches back-to-back. ‘The Demolition Man’ tries to clinch up but is easily shrugged off. Volkov is doing well with this jab right now. Overeem lands a beautiful uppercut. Volkov counters and drops Overeem. The Russian tries to swarm on the mat but the veteran does well to survive and quickly bounces back to his feet. Volkov continues to pour it on. Overeem is doing well to survive and doesn’t look visibly hurt but he’s getting zero offence off and is in a defensive shell. Volkov lands another flurry of punches as Overeem retreats to the fence just before round one comes to an end.

Round 2: Volkov lands a nice jab early into round two. Overeem tries to go high with a kick but it’s easily blocked. Volkov continues to put hands on Overeem who is covered in blood now. The Dutchman pushes his opponent against the fence. Volkov manages to escape the position pretty quickly. He lands a nice one-two that wobbles Overeem. Another shot appears to wobble Overeem who momentarily turns his back. Volkov lands a few punches against the fence but he isn’t emptying the gas tank here. A right and drops Overeem and the referee waves off this fight.