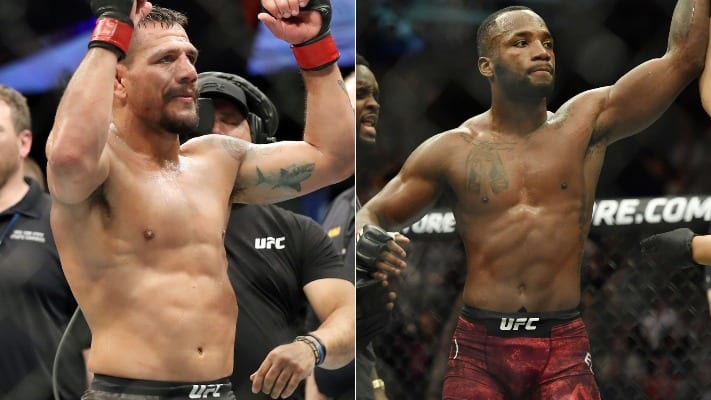 This coming weekend we have a great night of fights, ending with a stellar welterweight match up between former UFC lightweight champion Rafael dos Anjos and former BAMMA welterweight champion Leon Edwards. This is going to be a great match up to see where each guy is at in his career. “RDA” is 4-2 since moving up to welterweight, and Edwards is on a seven-fight win streak in the UFC’s welterweight division.

The former lightweight champion has been in the UFC since 2008, and has really fought the who’s who of contenders at both 155 lbs and 170 lbs. “Rocky” came into the UFC with an 8-1 record, with his only loss via disqualification. He went 2-2 in his first two UFC fights, before racking up seven straight wins in one of MMA’s deepest divisions. Edwards is five inches taller and will have a four inch reach advantage, but dos Anjos is no stranger to being the smaller man.

Rafael dos Anjos is one of the most well-rounded mixed martial artists out there, his only kryptonite has been with the best wrestlers in the sport. He does well against good wrestlers that’re good fighters, great even. However, when he fights elite wrestlers, he generally has troubles. Dos Anjos’ last two losses at lightweight were against Eddie Alvarez and Tony Ferguson; both are wrestlers, neither are the best at it. Cutting to lightweight got to be too much for him. His last loss at lightweight before that was to Khabib Nurmagomedov, and his two most recent losses were to Kamaru Usman and Colby Covington, three of the best in the sport.

Edwards does not have a wrestling heavy game. He generally picks his shots, and doesn’t take too many chances he doesn’t see necessary. This is why many of Leon’s wins are decisions, and a few that aren’t were ended in round three after he waited long enough to see an opening. An example of this would be his fights with Albert Tumenov and Peter Sobotta.

“Rocky” was doing well in the Sobotta fight throughout it, but just didn’t see much margin to take a chance until the end of round three, where he has the tied record for the latest finish ever in a three-round fight. The Tumenov fight was very close, and whoever won the third round was going to win the fight. The 27-year-old made sure it didn’t matter who out scored who that round, as he sunk in the rear naked choke and got the finish. Edwards also had two third round finishes before coming to the UFC; one of which was when he won the BAMMA title, and the other was when he defended it.

The style clash of this fight is very interesting, because dos Anjos, like has been stated, has only really lost to the elite of the elite of wrestlers lately, and “Rocky” has looked nothing short of incredible his entire UFC career. Edwards’ only clear loss was to Kamaru Usman in his fourth UFC fight. He lost a split decision to Claudio Silva in his UFC debut that was a very close fight, and his only other loss was via disqualification. To have your only dominant loss be to the UFC welterweight champion, a stud like Usman, and to have the resume of Edwards, inside and outside of the UFC, it’s very impressive.

Will dos Anjos be able to climb to 5-2 at welterweight, or will he fall to 4-3? Both of these guys throw tons of volume and are very technically sound strikers. Both are also incredibly technically sound on the mat, especially 3rd degree BJJ black belt dos Anjos. Lastly, both can also wrestle very well. This is such an exciting match up between two of the best in the world at 170 lbs, who takes it?