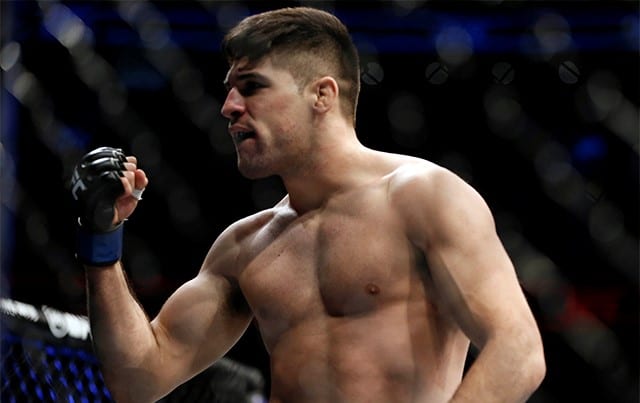 A welterweight fighters Vicente Luque and Derrick Krantz made the walk to the Octagon next in Rochester, New York at UFC on ESPN+ 10.

Luque (15-6-1) is one of the more underrated welterweights on the roster. He has gone an impressive 8-1 in the UFC since participating on season 21 of The Ultimate Fighter (TUF).

As for Krantz (24-10). The 31-year-old has been earning his stripes on the regional scene and in LFA most recently. He is an action fighter that has won his last four fights.

Krantz rifles forward with a hard right hand. He lands an uppercut and blitz’ Luque. Luque jumps a hold of Krantz’s neck but Krantz defends. He takes Luque’s back and looks for a rear naked choke. He cranks on Luque’s neck but let’s go. The fighters reset on their feet. Luque lands a hard leg kick and a big right hand. Krantz fires a straight right hand down the middle. Luque answers with a big knee to the body, Krantz drops, Luque lands a couple of punches and the referee steps in to stop it.

Vicente Luque defeats Derrick Krantz via TKO (punches) at 3:52 of round one