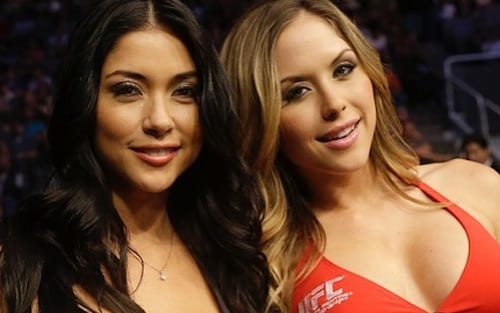 Since the UFC started to make its mark back in the mid-2000’s UFC ring girls have been a constant feature at MMA events.

At the start of each fight and in between rounds you will always see a stunningly beautiful, scantily clad woman doing laps around the UFC Octagon to keep fans and the audience watching at home updated and entertained.

Over the years plenty of UFC octagon girls have come and gone without making too much of an impact. But this list isn’t about them. This list is about highlighting the best UFC ring girls ever, the ones who have become fan favourites, left a legacy, or continue to do the damn thing in a pandemic hit world. Here’s the LowKickMMA top 10 octagon girls of all time.

No UFC ring girl list would be complete without Holly Madison so we just had to mention her even though she didn’t actually make our official top 10. The former girlfriend of Hugh Heffner lived in the Playboy Mansion for several years and already had a huge profile before working with the UFC. The promotion was dead set on staging their biggest event ever for UFC 100 back in 2009. Until this day the pay-per-view remains one of the biggest in company history. It was stacked with huge fight after huge fight. A heavyweight title bout between Brock Lesnar and Frank Mir topped the card, while Georges St. Pierre defended his welterweight belt against Thiago Alves in the co-main event. Before that, Dan Henderson scored one of the most vicious and iconic knockouts off all time to settle the score with Michael Bisping who had been goading him during the build-up

Such a historic card needed a special addition to the UFC ring girl team. In steps Madison who made her one and only appearance for the UFC, adding another touch of epicness to one of the best night’s in the sport’s history.

Since her very brief stint as an MMA ring girl Madision has enjoyed great success, starring in several movies and TV shows. However, since 2015 she has taken time away to look after her young children. The 40-year-old is recently divorced so perhaps we will see her step back into the limelight sooner rather than later.

This Brazilian is a relative newcomer in comparison to some of the ladies on this list but nonetheless Jhenny Andrade has well and truly earned her place among the best ring card girls ever. She became the first non-American to win the best ring card girl award in 2016 and defended the title successfully in 2017 and 2018.

Edith Labelle quickly became a fan favourite after joining the UFC in 2007. The first-ever Canadian ring girl spent two years with the company before being fired in the aftermath of UFC 100. Labelle was supposed to work the event but failed to show up due to food poisoning, but rumors swirled that she was actually suffering from a hangover. The UFC seemed to believe them, and Labelle never worked as a ring girl ever again.

Since leaving the UFC Labelle has gone from strength to strength. The 38-year-old currently works for London based MMA promotion Cage Warriors as a post-fight interviewer. So fans hoping to see her can still do so using their UFC Fight Pass.

The first-ever European UFC ring girl of course makes our list! Carly Baker made her promotional debut at UFC London back in 2013. Baker enjoyed her most successful year to date in 2019, picking up the ring girl of the year award at the World MMA Awards. The Wimbledon, London native is of course a model and has had great success through years featuring for the likes of FHM and Nuts Magazine. She has also starred in adverts for betting outlet Coral. Baker is not just a pretty face though – she has signed record deals during her rise to prominence and has co-writing credits with Kasabian and Take That’s Gary Barlow.

Chandella Powell became the first African American UFC ring girl in 2010. The newcomer continued to work as a Playboy Bunny Hostess at the Palm Casino, in Las Vegas during her time with the promotion. Powell’s two-year run as a ring girl came to an abrupt end after it was discovered she had previously taken soft-core pornographic photos.

Powell made the below public apology, but it wasn’t enough to save her job.

“When you are young, you often don’t realize that your actions have consequences. I made a bad decision about ten years ago, but you learn from these moments. There is nothing I can do to change the past, and believe me, if I could, I would. That decision doesn’t represent who I am today. All I can do now is put the past behind me and move forward. I am sorry to disappoint any of my fans and my family at Zuffa. I love you guys :)”

Chrissy Blair joined the UFC back in 2013 but unlike many, she came to the company already known to a lot of MMA fans. Away from her fledgling modeling career Blair worked as a ring girl for Strikeforce before it was bought out by Zuffa. Blair made the switch to the UFC and hasn’t looked back. Even in 2020 she remains active and is one of the few octagon girls still getting work during the coronavirus pandemic. Away from her work in MMA Blair owns Kalumi Beauty, a company that creates Marine Collagen protein bars they call a “powerful beauty supplement and delicious snack.”

Logan Stanton was like a breath of fresh air when she arrived on the scene. She remains popular among old school UFC fans more than a decade after her time with the UFC came to an end. The young beauty didn’t fit the typical UFC ring girl type, and this was something she realized. For that reason, she wasn’t overly surprised or upset when the company chose to let her go back in 2009.

“I was definitely upset but at the same time, I was never going to make a career out of being a ring girl. It is what it is. It was a job and although I loved it, life goes on and there’s a ton of work in L.A. to keep me busy.”

“I pretty much knew from the beginning that I didn’t fit the ring-girl type. Going into it, I told the UFC that this is how I am and that I wasn’t going to get fake boobs.”

Joining the UFC at the tender age of 19 Rachelle Leah made an incredible impact. Leah made her debut at UFC 48 in 2004 and quickly became popular among fight fans. Not only was she a great ring girl she was the first who was able to cross over into “proper” TV work. Leah has made appearances and even hosted shows which include Sexiest NYC Bartenders, Women of Action, Casino Cinema, Inside the UFC, and The Ultimate Fighter. Leah was last seen working alongside Jay Glazer and former two-weight UFC champion Randy Couture on a weekly show called MMAthletics.

Just missing out on the first prize is Brittney Palmer. The two-time winner of the ring girl of the year at the World MMA Awards has become a household name among UFC fans. Palmer burst onto the scene in 2012 and has been with the company ever since. She is one of the few girls still working events despite the ongoing pandemic.

Palmer is not just a pretty face though, the 33-year-old is also a very talented artist. She studied classic portraiture at UCLA and attended Brentwood Art Center. Today she is well known for her vibrant abstracts and portrait depictions of pop icons.

Arianny Celeste of course tops our list! The 34-year-old joined the UFC all the way back in 2006 and has become a legend in MMA circles as an Octagon girl. Since the World MMA Awards began in 2008 she has won the ring girl of the year award six times – more than anyone else. Celeste has featured in five different UFC video games, hosted a TV show alongside Joe Rogan, and even got into a public spat with MMA legend Ronda Rousey.

Away from her work with the UFC Celeste is of course a very successful model who has been featured in the likes of Playboy, Sports Illustrated, Maxim, and FHM. The fan favourite is currently taking some well earned time away from ring girl duties as she is set to welcome her first child.

Everyone at LowKickMMA wishes Arianny and her family the best – let’s hope we see her back working as a UFC ring girl in the near future.