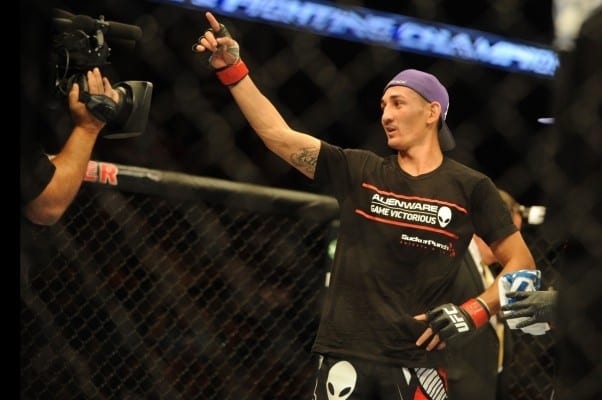 The UFC will finally be headed up to Saskatchewan this August, and they’re bringing a top-level featherweight scrap with them.

Local newspaper The StarPhoenix unveiled that, with the provincial government introducing the Athletic Commissions Act and establishing the Athletics Commission of Saskatchewan two months ago, the UFC has already booked an August 23 event from the SaskTel Center in Saskatoon.

The situation invoked Section 83 (2) of the Criminal Code of Canada being expanded to define prizefighting as not just boxing but also mixed martial arts last year. That made MMA no longer technically illegal in Saskatchewan, and the government decided to sanction professional combat sports within the province.

The main event will feature a pivotal headliner between rising young featherweights Max Holloway and Charles Oliveira, who will both come in on the heels of recent finish wins.

The UFC’s director of Canadian Operations Tom Wright spoke up about the upcoming card this weekend, focusing on the fact that he expects this Canadian debut to sell out like others have before it:

They’ll certainly have the fight to do it with in August, with the no. 5-ranked Holloway on an electric six-fight win streak, none more crucial than his surprising finish win over Cub Swanson at April’s UFC Fight Night 63 from Virginia. ‘Blessed’ is clearly knocking on the door of a featherweight title shot, but he’ll have to get by one of the most dangerous submission artists in the sport to do so.

Brazilian Oliveira has won four straight himself, with the most recent a thrilling guillotine submission of Nik Lentz at UFC Fight Night 67’s “Fight of the Night” versus Nik Lentz. He earned the rarely seen double bonus for his efforts, and is quickly fulfilling his long-held potential as one of the most promising prospects in MMA.

Wright seems to think that he pivotal main events could pave the way for an immediate title eliminator for the winner:

“I really honestly believe that whoever wins this (Holloway-Oliveira) fight will be in a (No. 1) contender’s fight next.”

The UFC’s debut in Saskatchewan is set, and Wright believes that a future featherweight title contender could emerge from it. Do you agree with that assessment?