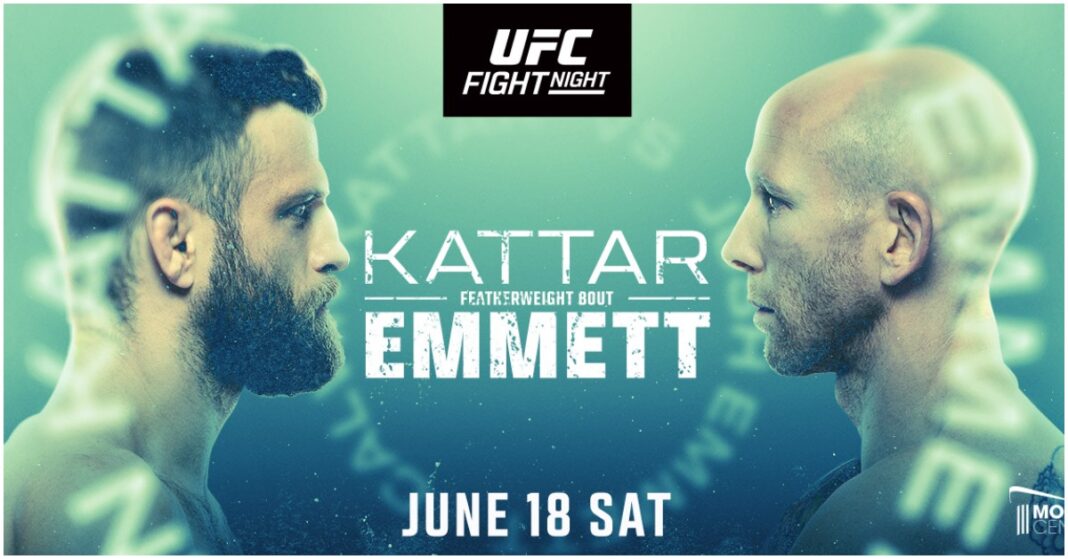 The UFC makes the trip to Austin this weekend with one of the most stacked Fight Night cards of the year.

Calvin Kattar vs. Josh Emmett promises to be stacks of featherweight fun, whilst a co-main event between Joe Lauzon and Donald ‘Cowboy’ Cerrone is one for the long-time fans of the sport.

Mix in bouts featuring the likes of Kevin Holland, Adrian Yanez, and Joaquin Buckley, and this should truly be a Fight Night to remember. Join LowKick MMA as we break down our top 3 bets for this weekend’s event.

In the main event of the night, Calvin Kattar takes on Josh Emmett in a featherweight bout that will see the victor cement themself in the top five of the division.

Emmett is a solid fighter with two very strong weapons in his arsenal. Those being solid wrestling and one-punch KO power. However, unfortunately for him, Calvin Kattar is not only excellent at defending takedowns but is also incredibly durable.

Emmett may well have some success early on, but watch for Kattar to begin asserting dominance as the fight goes on. His striking is clinical and brutally effective, to the point where it would not be a surprise to see him finish the fight in the later rounds.

Kattar’s ML is currently at 1.44 on Betway, which is priced relatively accurately. If you feel confident about Kattar’s chances of finishing the fight, then his KO line is at a rather appealing 3.10. However, we will parlay his ML with one of the bigger favorites on the card, such as Jasmine Jasdavicious or Ricardo Ramos.

A bout between two fan-favorite MMA veterans takes the co-main event slot of UFC Vegas 57. After the bout was initially canceled due to ‘Cowboy’ suffering food poisoning, fans will finally be able to see Donald Cerrone and Joe Lauzon throw down this weekend.

There are a number of intriguing caveats to this fight that may sway bettors to one side or the other. We will be backing the underdog, Joe Lauzon. Cerrone has remained the more active fighter, but he is winless in his past six octagon appearances. In four of these performances, ‘Cowboy’ was finished inside the distance.

Lauzon admittedly has not competed since 2019 but is coming off a win, having knocked out Jonathan Pearce in the first round. We will be banking on Lauzon’s finishing ability, as well as the diminishing durability of Cerrone.

For our final bet, we will put together a parlay from two UFC bantamweight prelims bouts.

Adrian Yanez is one of the division’s biggest prospects, and should be facing a higher level of opposition at this point. Not to say that Tony Kelly isn’t a talented fighter, he clearly is, as shown in his recent win over Randy Costa. However, Yanez has that something special, and this will be yet another opportunity to display exactly why so many MMA hardcore fans are hyped about him.

Cody Stamann is a solid fighter in the prime of his career, having already defeated the likes of Brian Kelleher, and Alejandro Perez. He takes on a veteran of the game in the form of Eddie Wineland. With his debut taking place in 2003, Wineland is one of the most experienced fighters on the entire UFC roster. However, bantamweight is not a division that is kind to fighters in the twilight of their careers. Wineland is coming off back-to-back KO losses and has not won in the UFC since 2019.