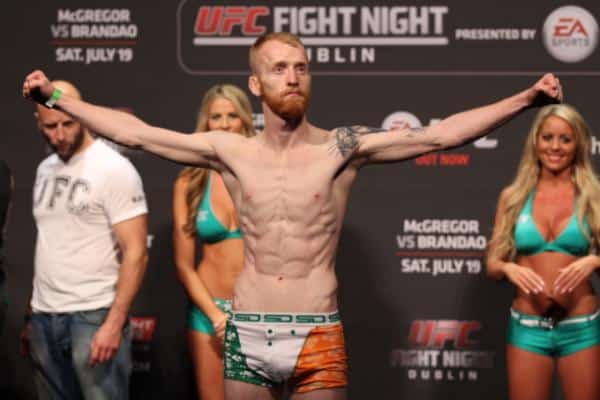 Paddy Holohan vs Vaughan Lee gets underway, great first round by Holohan as he locks up multiple submission attempts, but he leaves himself open at the end of the round and Lee takes the back. ‘Hooligan’ survives as the buzzer sounds. Lee in control starting the second round, smothering Holohan, but the Irishman winds up on top. Holohan to side control quickly, elbows now, and he wins the round convincingly. Groin shot by Paddy, Marc Ratner chimes in to talk about groin shots, Lee looking tired as they restart. Kicks by Holohan, body shots by Lee, counter right now by the Englishman. Spinning attacks now by Paddy, Lee is flat footed throwing not much. Straight left lands on Holohan’s chin, takedown for Paddy and the fight ends. Decision for Holohan.

Light-heavyweights Haans Stringer and Ilir Latifi collided, Latifi opens with leg kicks, uncorks with a right hand, and Stringer is out cold. Damn, Latifi with the first round KO!

Mickael Lebout vs. Teemu Packalen saw the Fin débutante looking for a takedown straight away, Lebout was savvy to it but eventually fell into the guard and got swept. Packalen to mount looking for a head-arm choke, they scramble and now the Frenchman is on top. The Fin reverses now and straight in to mount, huge elbows and Lebout is hurt, great first round. Lebout more hesitant to go down to ground this round, sprawling and brawling. Beautiful spin kick to the body by Packalen, but he looks tired. Illegal knee on the ground by the Frenchman and that was a little dirty. Marc Ratner in on the commentary now, awesome, nice jab by Packalen as they continue and he clips Lebout with a right hand, they go down, Packalen with a leg lock, but he loses it.

Round three now, left right by Pack man, standing kimura attempt now. Lebout stuffs a shot and is in top control, trading big shots now, Packalen looks tired, but he did take the fight on nine days notice. Tough fight to score as they trade positions on the mat, they stand and Pack man rocks Lebout, and it’s back to the ground again. Busy fight! UD for Lebout.

Featherweights Robert Whiteford and Paul Redmond opened the FOX Sports 1 prelim section, they trade big punches early on, Whiteford drops Redmond with a right hand but he gets up. Eye poke, warning from the ref to Redmond, Whiteford with heavy hands here. Redmond connects with a big right hand, a huge left from Whiteford and Redmond is out! Whiteford jumps in to the crowd catching an official with his foot to the head on the way out, what a knockout! It looks like a headbutt on the way down by Whiteford did some excess damage, but the fight was already over. What a night so far!

Up next we saw Marcus Brimage take on Jimmie Rivera at bantamweight, they go at it early on tagging each other with wild strikes. Brimage connecting over and over with the left hand, but Rivera catches him on the counter with a big right hook and Brimage is in big trouble. Rivera chases him down with a huge flurry and that is all she wrote. Rivera defeats Brimage by knockout in round one.

First up was Daniel Omielanczuk vs. Chris De La Rocha at heavyweight, and De La Rocha (a grappler) chose to stand with the Polish striker and paid the price. Heavy punches, kicks and a final barrage on the mat and it was all over. Omielanczuk def. De La Rocha by TKO in one round.

Tune in to LowKickMMA for the UFC Fight Night 72 live prelims results!