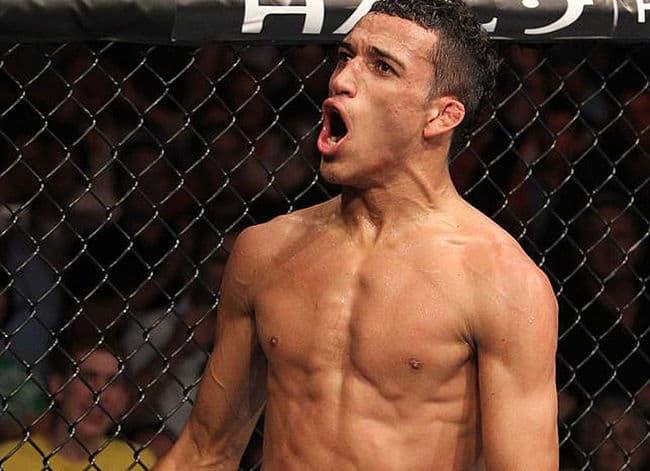 Looking to finish off a rivalry that has endured since a no contest due to an illegal knee at 2011’s UFC on Versus 4, top 15-ranked UFC featherweights Charles Oliveira and Nik Lentz squared off in the co-main event of tonight’s (Sat., May 30, 2015) UFC Fight Night 67 from the Goiania Arena in Goiania, Brazil.

Both came out throwing kicks, with Lentz looking to clinch with a body lock early on. He flung heavy shots at ‘Do Bronx’ but Oliveira went for a guillotie choke that ‘The Carny’ reversed. Lentz landed light ground and pound before Oliveira reversed to land a strong knee to the body and an elbow. Lentz snapped a combo and clinched again, breaking to score a big right before eating another knee to the body. A huge combo came from Lentz as Oliveira acted like he was poked in the eye, but referee Kevin McDonald didn’t halt the action. Olivera landed some huge elbows in a wild exchange, dropping Lentz with a big knee to the body and following with a flurry to look for the finish. Achieving the mount, he rained down elbows and punches at the end of the furious first frame.

Oliveira came out with hard kick to the body in the second, looking for another knee and some punches. Lentz drug Oliveira to the mat and smothered him in half guard,, elbowing ‘Do Bronx’ and moving into side control. Lentz slammed Oliveira on his head, but ‘Do Bronx’ hit him with some vicious up kicks. Lentz went for a guillotine, turning it over to mount Oliveira. He escaped, but Lentz scored with ground shots. Oliveira then went for a heel hook, twisting around only to see Lentz escape to mount him yet again. Oliveira then went for a rolling toe hold, but ‘The Carny’ finished the grinding second frame in control and out of danger.

Lentz looked a bit slower in a sloppy start to the last round, absorbing another knee to the body before clinching. All of the sudden, Oliveira locked up a super tight guillotine after another knee that had ‘The Carny’ in big, big trouble. Lentz was ultra-tough, but the hold was too tight and he had no other choice but to tap.