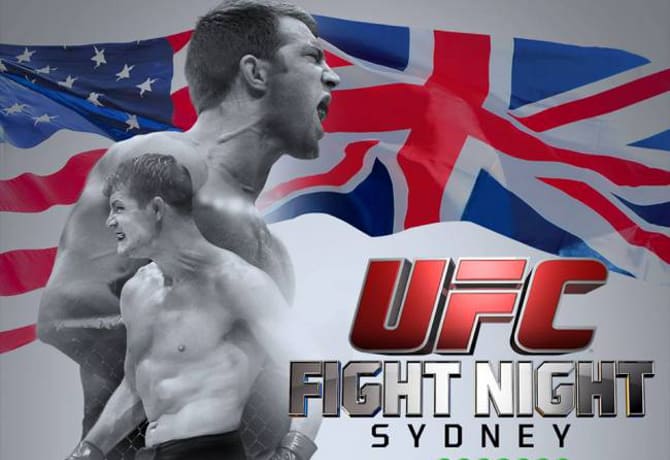 Tonight’s (Fri., November 7, 2014) UFC Fight Night 55 is in the books from the AllPhones Arena in Sydney, Australia, and the card may go down as the most action-packed UFC event of the year.

The main event features the long-awaited middleweight grudge match between No. 5-ranked Luke Rockhold and No. 9 Michael Bisping. “The Count” kept up a much higher volume of strikes in the first round, but Rockhold seemed to largely stay out of range of most of the punches. Rockhold slammed several hard body kicks into Bisping’s side towards the end of the opening frame.

It didn’t last as long in the second, however, as Rockhold landed a big straight left to start the second, following with a fake to high kick and a huge head kick to floor Bisping. He finished the fight with an impressive one-armed guillotine choke to cap off an insane night of endless finishes.

Rising lightweights Ross Pearson and Al Iaquinta threw down in the co-main event. The first round was an exciting one, with Pearson coming out throwing heavy leather. Iaquinta utilized excellent footwork counter with several sharp right hooks and uppercuts. The Serra/Longo-trained fighter caught Pearson with a counter right on the button in the second, following up with some impressive combinations to floor Pearson and unleash some unnecessary follow-up shots to earn yet another knockout finish.

The Ultimate Fighter (TUF) veterans Robert Whittaker and Clint Hester squared off at middleweight. Both fighters landed a ton of hard shots, including a huge spinning back elbow from Hester in the first. But after an all-out war erupted in the second round, Whittaker scored a thunderous knee down the middle to stun Hester and finish with a flurry of strikes. A great win for the young Australian.

Australian fan favorite Soa Palelei kicked off the main card against the returning Walt Harris. Palelei won the back-and-forth battle of heavyweight power strikers with a smothering second round barrage of ground and pound.