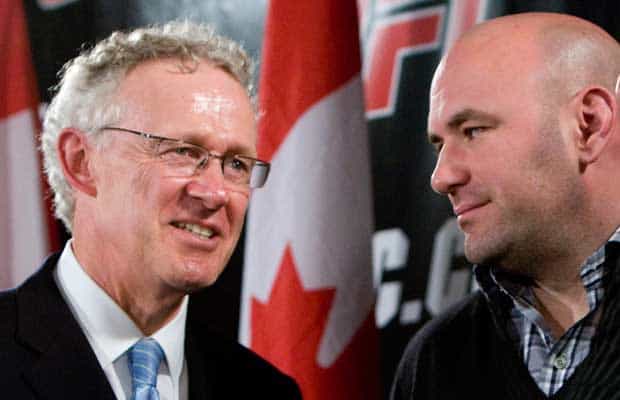 The layoffs promised by the new UFC owners have hit the promotion fast and hard.

Following a report that owners WME-IMG would lay off ‘under 15 percent’ of the company’s current employment following their record-setting $4.2 billion purchase of the world’s biggest MMA promotion this summer, the talent industry giant has put into motion a far larger impact on the UFC’s floundering Canadian division.

Word arrived from MMA Fighting’s Ariel Helwani today (Wed., October 19, 2016) that the new owners laid off roughly 80 percent of the company’s Toronto office, with head man Tom Wright, the UFC Executive Vice President and General Manager for Operations in Canada, Australia and New Zealand. Wright had been employed by the company since 2010 after leaving the Canadian Football League (CFL).

Wright’s departure comes one day after WME-IMG let go of top senior executives Garry Cook, Marshall Zelaznik, Ken Berger, and Jaime Pollack. The layoffs reportedly affected UFC offices in Las Vegas, Europe, Brazil, Canada, Latin America, and Asia, and could include others before all is done.

According to Helwani, approximately 60-80 overall employees out of the company’s roughly 350 were affected. New ownership has declined to comment on the reporting.

The move brings the future of the UFC’s once-thriving Canadian division into serious question, as Wright’s departure comes during a week when legendary Canadian star Georges St-Pierre revealed that WME-IMG allegedly took a deal he had with former UFC owner Lorenzo Fertitta off the table before leading him on without a concrete fight offer. St-Pierre says he’s a free agent, but his employers, who are interestingly the direct competitors of GSP’s own talent agency CAA, insist he’s still under contract and will remain that way.

The promotion clearly missed a golden opportunity to explode back into the Canadian market in a big way with the UFC 206 pay-per-view headed to Toronto in December. St-Pierre headlining it would have most likely all but guaranteed a million-plus buy card, and now the Daniel Cormier vs. Anthony ‘Rumble’ Johnson headliner just doesn’t have the same appeal.

In any case, the UFC is about to look a whole lot different heading into 2017.