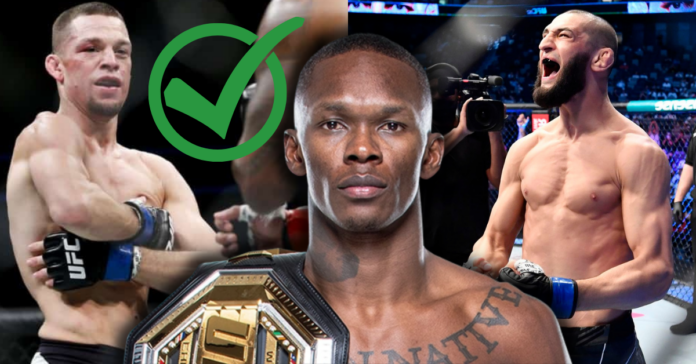 The UFC Middleweight World Champion Israel Adesanya had made his prediction for the UFC 279 main event between Nate Diaz and Khamzat Chimaev. After more than a decade in the organization, this will be Diaz’s final fight in the UFC.

‘The Last Stylebener’ did a breakdown for this welterweight bout on his YouTube channel, where he lamented on Diaz. The Nigerian-Kiwi fighter has been a fan of both of the Diaz brothers since he was a child. “Win, lose, or draw, it’s always a brawl,” he said and reflected on some of Diaz’s best moments in the Octagon. Including the triangle choke over Kurt Pellegrino, winning The Ultimate Fighter, and defeating PRIDE FC champion Takanori Gomi, among others.

Adesanya added that the UFC is maybe treating Diaz unkindly by feeding him to the undefeated Russian fighter ‘The Wolf’ Chimaev. “After every fight, because he wants to fight everyone ‘I kill everybody,’ ” Adesanya continued, “I feel like they’re doing Nate wrong by trying to feed him this up-and-comer who’s just destroying everyone … It’s hard to finish Nate, but if someone could do it, it might be this guy.”

But ultimately, Adesanya picked Diaz to walk away from the UFC with a win in his final bout. “If Nate’s going to win, and I think he’s going to win, he’s going to finish him later,” ‘The Last Stylebener’ believes the US-born fighter has an advantage in this fight by virtue of the fact that it is a five-round bout, “I think Chimaev’s going to gas around the third, fourth, fifth, and then Nate just takes over, TKO or submits him.”

Israel Adesanya, the UFC Middleweight World Champion, chose other fights on UFC 279 aside from Nate Diaz vs Khamzat Chimaev. For the light heavyweight showdown between Johnny Walker vs Ion Cuțelaba, he said, “Johnny Walker, I’ll pick him in this fight … Johnny Walker for the win, I’m going to say knockout probably.”

“[Kevin Holland] is gifted,” Adesanya said of Kevin Holland vs Daniel Rodriguez at UFC 279, “Kevin’s faster, he’s not bad, he’s tough, but he gets hit. I’m going to pick Kevin in this one.”

“Co-main of the evening, ‘The Leech’ vs ‘El Cucuy’” for the welterweight showdown between Tony Ferguson vs Li Jingliang, ‘The Last Stylebener’ said, “Ferguson needs to get back to the sh*t that made him really good. I thought it was scrambles … Anyway, I’m going to pick ‘The Leech’ because I think he’s got momentum on his side.”

To see the full UFC 279 event breakdown from Adesanya, see below: