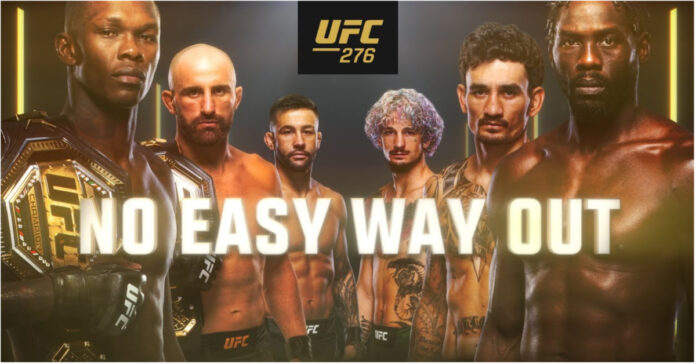 This weekend MMA fans will be treated to one of the most stacked PPV cards in recent memory, with UFC 276 playing host to a plethora of incredible matchups.

Whilst middleweight champion Israel Adesanya defending his title against lethal knockout artist Jared Cannonier takes the headline spot, Alexander Volkanovski and Max Holloway’s trilogy bout, situated in the co-main event slot, promises to be the kind of fight that fans of combat sports will be discussing for years to come.

Pair these two title bouts with a No.1 contender fight between Sean Strickland and Alex Periera, as well as a classic veteran vs. prospect clash between Pedro Munhoz and Sean O’Malley, and you truly have one of the most stacked PPV main cards of the year. If you want an even deeper insight into all the best betting tips, check out Kabaddi betting tips.

Join us at LowKick MMA as we take a look at our top three betting angles for the main card of his historic event.

The main event of UFC 276 may well be the most one-sided fight on the card. With all due respect to Jared Cannonier, it is very hard to see any other result than an Israel Adesanya victory playing out.

However, this raises the question of how will ‘The Last Stylebender’ be victorious. He has been vocal in his desire to pick up a finish in this fight, similar to how he knocked out Paulo Costa. Despite him saying this, Adesanya has gone to the distance in four of his past five fights.

If your bookie has it, I would advise taking an alt-round betting prop, for Adesanya to win in rounds 4, 5, or decision. If this is not available, then use Adesanya as a parlay piece. Pairing him with Sean O’Malley or Andre Muniz is the way we will go.

A trilogy bout between two of the greatest fighters ever to compete in the UFC takes place in the co-main event slot of UFC 276. Volkanovski did win the first two bouts, although the second was contentious, to say the least.

Since the second fight, both men have competed twice against elite opposition. Volkanovski has defended his title twice, against Brian Ortega and possibly past his prime Chan Sung Jung, aka ‘The Korean Zombie.” Holloway defeated both Calvin Kattar and Yair Rodriguez, putting on two performance of the year contender bouts in the process.

Volkanovski is the favorite in this bout, likely due to the combining factors of his wins over Holloway, and the dominant fashion in which he defeated Jung.

However, we will take Holloway. He is clearly the value play here, as he possesses a similar skill level to that of Volkanovksi and certainly has the potential to win this fight. Not to mention he did drop Volkanovksi twice in the second fight, indicating that he has a higher finishing potential.

Alex Pereira steps into this No.1 contender bout with only two UFC wins on his record. He is also the favorite in this fight.

Watchers of the LowKick MMA Preview Show will already know which angle we are taking in this one. Sean Strickland is a well-rounded mixed martial artist, equipped with very solid striking, as well as a much-underrated wrestling game.

Pereira may knockout him out, it’s certainly a possibility. However, Strickland simply has far more ways to win this bout. We have to take the plus money on an experienced top competitor like Strickland over a newcomer to the sport, regardless of his pre-established narratives with the champion.

What are your best bets for the main card of UFC 276?