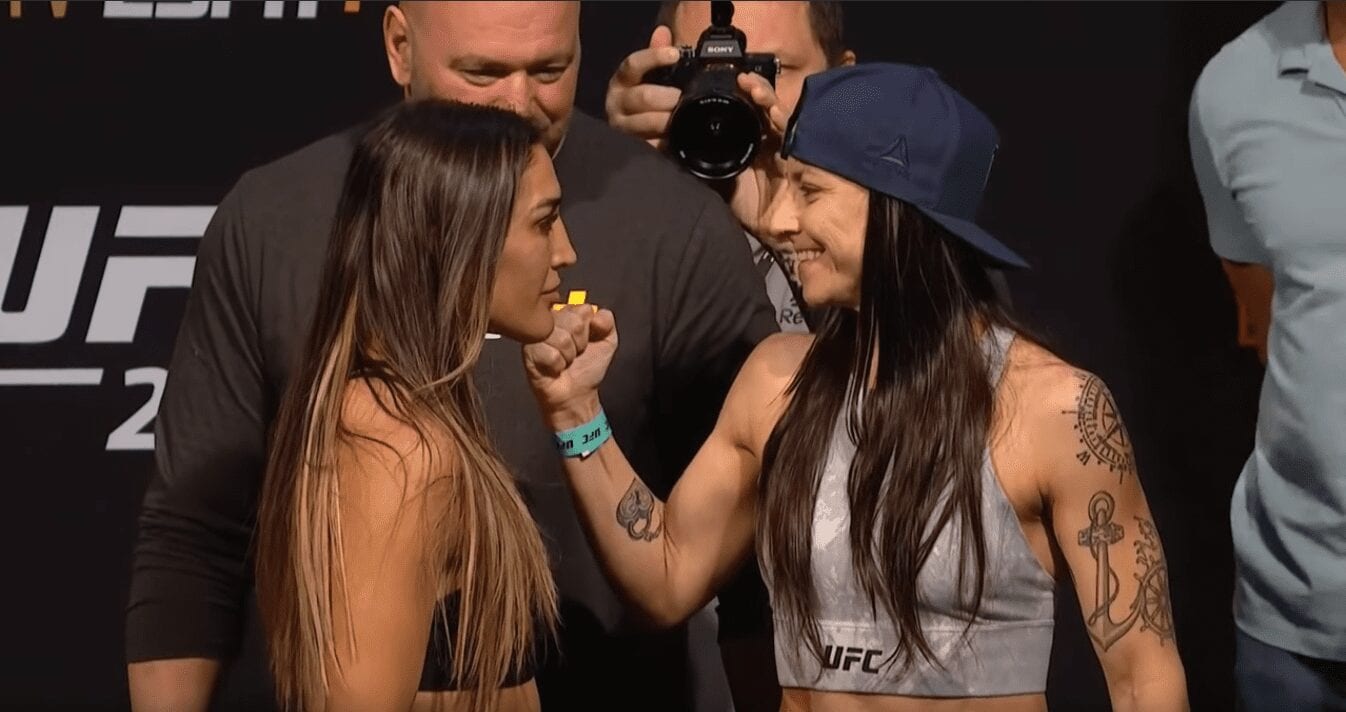 UFC 238 is here as the preliminary card results are underway as the Las Vegas-based promotion holds this latest event on television for fight fans around the world to watch the show.

It’s once again fight day here at LowKickMMA, and the talent on display tonight (Saturday, June 8, 2019) will come from in the form of UFC 238. Headlining the card are Henry Cejudo and Marlon Moraes, but there’s a whole bunch of great fights also taking place on the preliminary section of the card.

Tatiana Suarez vs. Nina Ansaroff in a women’s strawweight bout closes the preliminary card on ESPN in what should be an interesting fight. In round 1, Suarez immediately has Ansaroff on her back and is landing some solid strikes. Ansaroff then manages to get up. In round 2, it was all Suarez as she was the more dominant fighter with her striking. In round 3, Ansaroff rocking Suarez with a flurry at the bell. The judges gave the unanimous decision win to Suarez.

Aljamain Sterling vs. Pedro Munhoz is next in a bantamweight bout. In round 1, A hook from Sterling and he’s stunned Munhoz a couple times. They trade a series of body kicks. Munoz clipped him with a head kick and teased a guillotine choke but let go. Sterling clipped him late in the round. In round 2, Sterling hurts Munhoz with a right hand. Munhoz isn’t backing down and is trading blows. More body kicks from Munhoz. Low kick has Sterling hurt. Munhoz jumps guillotine, but can’t get it.  In round 3, Sterling landing early and often. Both are throwing everything they’ve got at each other. Both fighters just started throwing wild bombs in the center while talking trash. Sterling got the decision win in an entertaining bout.

Karolina Kowalkiewicz vs. Alexa Grasso is next in a women’s strawweight bout. In round 1, Grasso was landing some big shots to the former title contender through the round. Grasso takes the clinch to land short knees. Kowalkiewicz landed some decent shots. In round 2, Grasso continued to press forward and was outclassing Karolina. In round 3, Karolina tries to come back but walks into more big punches. A couple of hooks have her nose busted up and Grasso lands a couple more. They had a wild exchange towards the end of the round that led to Grasso going for a standing guillotine choke but the bell sounded. Grasso got the unanimous decision win.

Ricardo Lamas vs. Calvin Kattar in a featherweight bout opens the ESPN preliminary bouts. Kattar drops Lamas with a combination and then pours on him with punches to cause a stoppage late in the first round.

Angela Hill vs. Xiaonan Yan in a women’s strawweight bout finishes off the ESPN+ preliminary card. In round 1, Hill cracks Xiaonan with a big shot, goes for the takedown, but Xiaonan ends up on top in guard. Hill went for a triangle choke late in the round but saved by the bell. In round 2, Yan hits the body lock to get Hill down and land an elbow. Hill right back up and lands a  couple knees. Xiaonan is out-working her. In round 3, Hill with a low kick of her own and jumps in to land two hard hooks and a side kick. Xiaonan staying busy with striking. Yan got the unanimous decision.

Bevon Lewis vs. Darren Stewart is next in a middleweight bout. In round 1, Stewart looking to swing hammers. Lewis looking for another chance to drop into the clinch again. A hard hook right at the bell from Lewis and Stewart was rocked. The later rounds were close with striking and graplling but very little action, which left the fans upset. The judges gave the win to Stwewart by unanimous decision.

Grigorii Popov vs. Eddie Wineland is next in a bantamweight bout. In round 1, Wineland is landing some good shots early on the feet. Wineland connects with a huge right hand, but Popov isn’t backing down any as Popov found his timing. In round 2, Popov turns the tides right at the start of the round as he rocked Wineland. Wineland hits a double leg and instantly gets elevated and Popov gets up. Wineland drops him with a big right hand. Wineland pouring it on and Popov is down. Wineland tries a guillotine but can’t get it. Wineland drops him again and finishes it up with strikes for the win.

Opening the UFC Fight Pass prelims is Katlyn Chookagian vs. Joanne Calderwood in a women’s flyweight bout. In round 1, Calderwood has banged her lead leg while striking it out for the entire round. Chookagian with a nice right hand to end the round. In round 2, Calderwood catches a kick and gets the takedown. Chookagian was able to get back to her feet. Calderwood clinches to land a knee but eats a body kick. Both women doing some decent damage with kicks. Calderwood scored a late round takedown. In round 3, Chookagian, who was active and pushing the pace, was taken down again by Calderwood. In the end, the judges gave the win to Chookagian by unanimous decision.