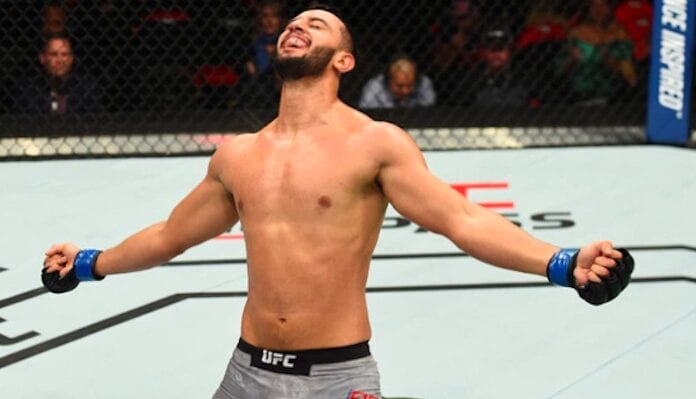 The wait is over. UFC 229 Is here. Before Conor McGregor and Khabib Nurmagomedov collide in the biggest fight in MMA history two light heavyweight fighters look to impress.

Ovince St.Preux takes on the unbeaten prospect Dominick “The Devastator” Reyes in an exciting light heavyweight contest at UFC 229.

“OSP” has long been a top 205-pound fighter. At times he looks to be a serious contender and other times he looks less than stellar. Regardless, St.Preux has managed to win four of his last five fights and a win over the unbeaten Reyes could propel “OSP” into the top five.

The 28-year-old Reyes is red hot. He enters UFC 229 with a perfect 9-0 record with his last three fights coming inside the Octagon. “The Devastator” is a quick starter. He has four KO wins inside of one minute.

Reyes throws a body kick to start the fight. Both fighters exchange kicks. OSP Stumbles off balance and quickly regains composure. OSP indicating cage control and clinches Reyes against the cage. Reyes reverses position, the fight stalls. OSP flips position, Reyes lands several hard elbows as OSP tries to take him down. Reyes explodes with strikes and lands several punches. OSP is nearly out on his feet. Reyes attacking with kicks now and goes high, OSP deflects a high kick to end the round.

OSP changes stances to orthodox and lands a leg kick. Reyes fires a left hand straight down the pipe. OSP clinches and looks for a takedown but Reyes defends and puts OSP’s back against the cage. After some stalling the fighters separate. OSP goes back to southpaw and throws a head kick that just misses the mark. Reyes lands a left kick to the body and OSP answers with a left hook to Reyes’ body. The fighters play patty cake with their hands to close out the round.

Reyes throws a high kick to start the third and final round. He follows it up with a leg kick. OSP goes over the top with a right hand but doesn’t quite connect. OSP is throwing a sidekick that hasn’t found its mark yet. Reyes throws a left hand and OSP closes the distances and clinches Reyes against the cage. Reyes reveres position and separates from OSP. OSP is finding his range in the last 90 seconds but it’s most likely too little too late. Reyes blasts OSP to end the fight but the bell has sounded.