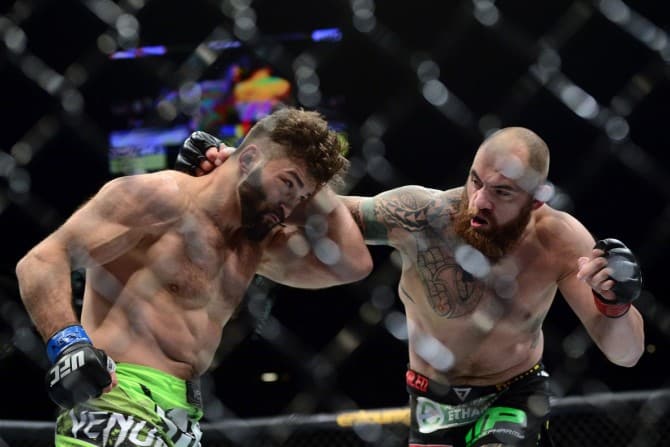 Being billed as one of the biggest cards of the year, UFC 187 delivered. The event went down tonight (May 23, 2015) from the MGM Grand Garden Arena in Las Vegas, Nevada, presented live on pay-per-view (PPV). Featuring multiple title bouts, fans were treated to a plethora of action and many exciting finishes.

In the main event of the evening, top contenders Daniel “DC” Cormier and Anthony “Rumble” Johnson squared off for Jon Jones’ vacant UFC light heavyweight championship. Known for his lethal power, “Rumble” was able to drop Cormier early on, but wasn’t able to finish the fight. “DC” battled back in rounds two and three, using his wrestling to control the action, and busting Johnson up with elbows. Cormier was able to weather the storm, and lock in a rear naked choke in the third round, becoming the new UFC light heavyweight champion, and earning a ,000 “Performance of the Night” bonus in the process.

In the co-main event, oft-injured middleweight champion Chris Weidman finally returned to the Octagon to meet controversial Brazilian Vitor “The Phenom” Belfort, who has also been on the shelf for a quite a while. Weidman came in with something to prove, and he did just that, starching Belfort in the first round, scoring a TKO victory, and earning a $50,000 “Performance of the Night” bonus as well.

Earlier on the main card, heavyweight sluggers Travis Browne and Andrei Arlovski did battle. With Browne being the favorite, Arlovksi shocked the crowd by rocking his opponent early. Browne battled back tagging Arlovski, but “The Pitbull” was able to rebound once again and secure a TKO victory. Both men earned $50,000 “Fight of the Night” bonuses for the action-filled round.