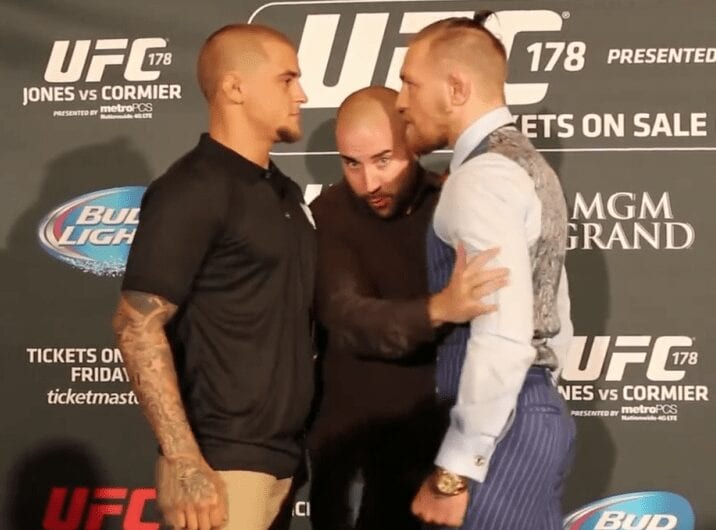 UFC 178 is just days away now, and the hype is steadily building for what could easily steal event of the year from the likes of UFC Fight Night 46. The common denominator for both events is Irish bad boy Conor McGregor, and he will square off against Dustin Poirier on the main card this Saturday (Sept. 27th, 2014).

“Diamond” stands in the way of “The Notorious” cracking the top top five of the UFC featherweight division, in what will likely be a very lively affair. So how do these two feisty 145-pounders stack up? Check out my UFC 178 Conor McGregor vs Dustin Poirier fight breakdown……

It’s fair to say that McGregor is nice with the hands; his traditional boxing ethics mixed with unique footwork and wide array makes him a nightmare for most of the top 15, at least in my opinion. Claims by “Diamond” that McGregor is a point fighter may have been a little unresearched, as “The Notorious” has finshed 13 of 15 wins by way of strikes.

Poirier has won 7 of 16 by strikes, and is known for having well balanced offence on the feet. Neither man has ever succumbed to a T/KO, and I feel that this topic is more about the footwork and styles. For me, “The Notorious” has the bigger arsenal of weapons to choose from, and the more refined style…I’m calling it 60-40 Mcgregor

This is where I feel “Diamond” will want the fight to go down, although McGregor is no slouch on the mat, both his losses have come by way of submission. The Irishman has a purple belt in BJJ, compared to Poirier’s brown belt, but don’t think “Diamond” isn’t succeptable to the grappling finish too; Chan Sung Jung finished him by d’arce choke back in their 2013 ‘Fight of the year’ winner.

With only one submission win on his record, compared to Poirier’s six, we really haven’t seen all that much of McGregor’s offensive submission game. For “Diamond” though, we’ve seen d’arce choke, mounted arm bar-triangles and straight armbars during his five year career. Take it there if you can Dustin; I’m calling it 60-40 Poirier

Training out of American Top Team, you know that “Diamond” has a good all round wrestling base. By no means does this mean he will find it easy to take his Irish foe to the mat. McGregor doesn’t spend too much time on his back, having never been taken down in the UFC. Poirier has pretty solid TDD too, and he gets the slight advantage mainly due to his offensive takedowns…55-45 Poirier

My take on the fight-Dustin Poirier needs to get this one to the mat, he is not a sloppy striker but I feel like McGregor will rip him apart on the feet. Striking is the key for “The Notorious” in my books, and he should try and keep Poirier at range with his rangy strikes…..God Damn, I can’t wait for UFC 178 Conor McGregor vs Dustin Poirier, the return of Dominick Cruz, Alvarez vs Cerrone and the rest!