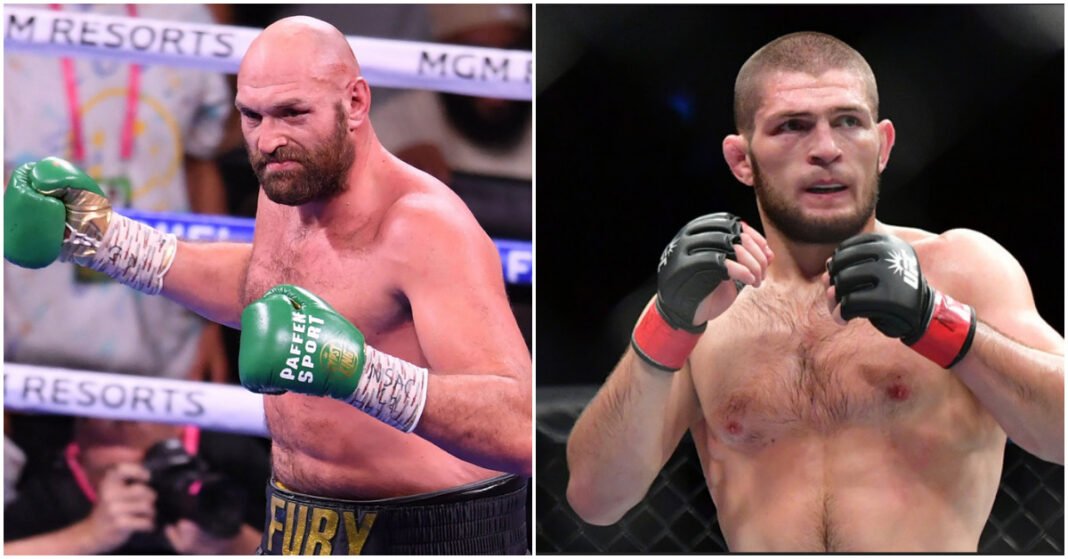 Boxing’s heavyweight king Tyson Fury took to social media this morning to pay homage to one of MMA’s greatest ever, Khabib Nurmagomedov.

In a tweet sent out early on Tuesday, Fury praised the way Khabib left the sport at the height of his success, seemingly without sustaining any notable long-term damage.

Nurmagomedov retired from mixed martial arts after defeating Justin Gaethje at UFC 254. The win moved ‘The Eagle’ to 29-0 in his pro career and was the third defense of his lightweight championship.

The retirement came as a surprise to many but was largely accredited to the passing of Khabib’s father and longtime coach Abdulmanap, who lost a battle with COVID-19.

“No way I’m going to come here without my father. It was first time after what happened with my father, when UFC called me about Justin, I talk with my mother three days. She doesn’t want me to go fight without my father but I promised her it was going to be my last fight. If I give my word, I have to follow this. It was my last fight here.”

‘The Gypsy King’ has acknowledged in interviews in the past that he’s entering the twilight of his career and that everyone’s time to step down eventually comes sooner or later.

In an interview from this past December, Fury discussed his upcoming bout with Dillian Whyte and mentioned it would be one of his last.

The two heavyweights are targeted to square off on April 23, a bout that Fury hopes will take place in the UK. Fury also acknowledged the potential of him still fighting Anthony Joshua but admits that after Joshua’s loss to Oleksandr Usyk, the chances of him eventually taking on the Russian slugger appear more likely.

Do you think Tyson Fury will retire on top like Khabib Nurmagomedov did?