LowKickMMA.com
Home MMA News Tyron Woodley On Why Gilbert Burns Is A Problem For Kamaru Usman 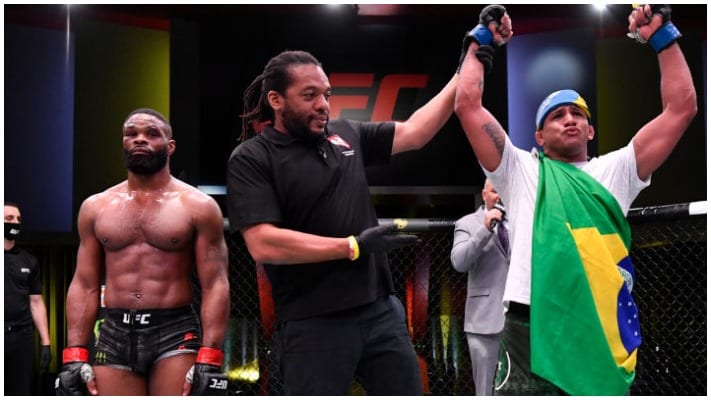 Former welterweight champion Tyron Woodley has been looking ahead to the next 170lb title fight which will likely see Kamaru Usman defend his belt against Gilbert Burns.

Woodley lost the welterweight belt to Usman back at UFC 235. ‘The Chosen One’ looked flat as he was dominated by Usman throughout the 25-minute fight. One year later he returned to action against Burns and again got dominated for five rounds before dropping another decision and a second consecutive defeat.

Speaking on the “UFC Unfiltered” podcast Woodley previewed the upcoming title fight and spoke about the various advantages Burns holds over Usman, he said.

“He has power. He has more power than Usman. He’s a better grappler than Usman, jiu-jitsu wise, but I think the striking – he may not be better, but he does punch a little bit harder, and it’s going to be a point where it has to go to the ground. We all just can be real: Gilbert’s gonna win that ground fight. Maybe not from his back, but if he finds a way on top or a position where he can take the back, it’s a problem.”

Woodley went on to praise Usman’s ability to adapt within a fight, he said.

“Whether you like watching him take Masvidal down or not, he never did one takedown against Colby, and Leon Edwards he struck and when it was time to takedown, he went for the takedown. So he’s very good at putting it together, and he’s going to have to do that against Burns.” (Transcribed by MMA Junkie)

Do you agree with Tyron Woodley? Does Gilbert Burns have several advantages against Kamaru Usman?