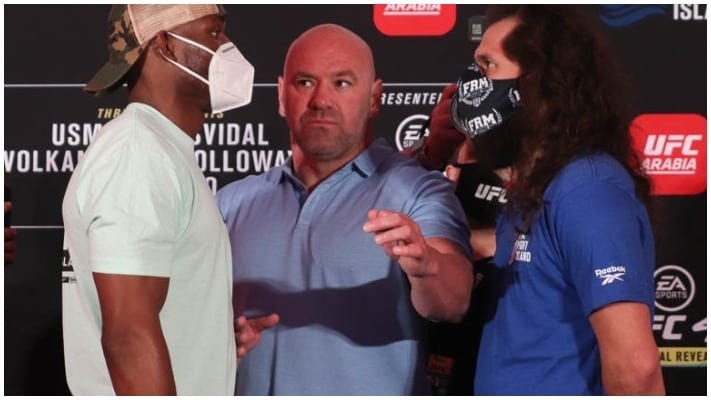 IT’S TIME! The UFC 251 main event is finally upon us. Welterweight king, Kamaru Usman put his title on the line against Jorge Masvidal who stepped up on six days’ notice to take this fight after Gilbert Burns was forced off of the card due to a positive COVID-19 test.

Round 1: Jorge Masvidal opens up with several big low kicks. He’s made to pay for his efforts as Kamaru Usman catches one and secures the takedown. Usman lands a big elbow from the guard. Masvidal eventually creates a scramble and begins throwing big punches and kicks from the bottom before getting back to his feet. ‘Gamebred’ is looking great on the feet he’s throwing heavy strikes and lots of them. Usman tries for the takedown. Both men end up against the fence. ‘The Nigerian Nightmare’ momentarily gets the fight to the mat but Masvidal pops straight back up. They continue to grapple against the fence. Both men land as they separate. Masvidal lands a huge shot – Usman eats it well. The champion is trying to pressure his opponent up against the fence but he’s eating lots of strikes right now. They grapple against the fence as round one comes to a close.

Round 2: Usman shoots in for a takedown at the start of round two. He’s got the leg elevated but Masvidal shows great defence to escape. The champ continues to pursue the takedown and pushes Masvidal up against the fence. Usman throwing lots of short knees and foot stomps. Masvidal creates some distance by throwing a shoulder strike but Usman lands his best punch of the fight as a result. They quickly get back to grappling against the fence. Usman is staying busy with lots of short strikes but Masvidal seems unfazed. They separate and immediately begin to wing in big punches. Lot’s of big misses from both men. Round two ends.

Round 3: Masvidal tries a few big strikes to start the round but he’s unable to handle anything clean. Usman manages to back up ‘Street Jesus’ against the fence again. They don’t stay there long and begin firing shots at each other – most of it misses. Masvidal refuses to move away from the fence and ends up once again with his back up against the cage. Usman lands a low shot and we have a temporary break in the action. Back underway, Masvidal throws a big overhand right which is partially blocked by Usman. ‘Gamebred’ tries a superman punch but Usman ducks under it and secures a takedown. Masvidal scrambles to his feet but is quickly slammed back to the mat. Masvidal explodes but is unable to get back to his feet. Usman is in the guard trying to posture up. He reigns down with big elbows at the end of round three.

Round 4: Usman grabs for the leg at the start of the round – pushing the fight back to the fence once again. Lot’s of shoulder strikes and foot stomps before he eventually secures the takedown. Masvidal does well to pop back up but he is unable to get Usman off him. The champ drops down for a takedown but bail on it, lands two punches then tries for the takedown again. Masvidal manages to separate and land a couple of shots that gets the attention of Usman. Masvidal looks physically tired though and quickly ends up against the fence. Usman lands a huge left hook. It’s just domination without anything significant from Usman. He is landing short shots, just enough to avoid the referee stepping in. Another round in the bank for the champ as round four comes to a close.

Round 5: Usman begins the round by pressing Masvidal against the cage once again. He lands a nice body shot. Masvidal lands a hook as Usman comes forward but he’s not bothered by it and secures a big takedown. The champ even manages to drag Masvidal away from the fence so he is unable to pop back us as he often has. Usman is in side control and despite Masvidal’s attempt to scramble he is unable to get up. Usman tries to step into mount but Masvidal avoids it and tries to get back to his feet. Usman grabs on to the head to prevent his opponent from getting up. Finally, Masvidal gets back up with less than one minute left on the clock. He breaks away and is trying his best to land something big but it’s not going to happen. The bells sounds and this fight is over.