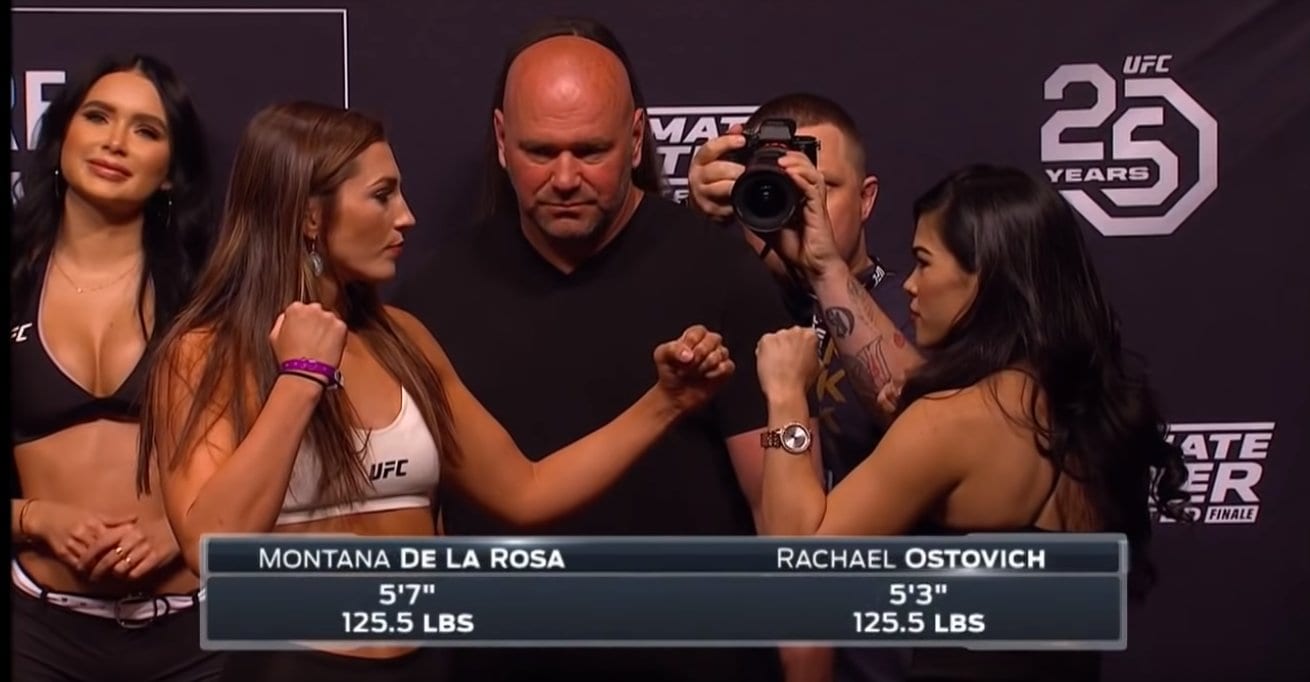 It’s once again fight day here at LowKickMMA, and the talent on display tonight (Friday July 6, 2018) will come from in the form of TUF 27 Finale. Headlining the card are Brad Tavares and Israel Adesanya, but there’s a whole bunch of great fights also taking place on the preliminary section of the card.

Montana De La Rosa vs. Rachael Ostovich in a women’s flyweight closes the preliminary card on FOX Sports 1. In round 1, De La Rosa is using her reach to pump out counter jabs when Ostovich tries to close distance for her right hand. Ostovich misses a superman punch but lands a follow-up right. Ostovich swings a big overhand as Rosa comes forward and it glances off the back of her head. Ostovich with a knee at the bell. In round 2, Ostovich connects on her own hard counter right hand. Rosa catches a trip and tries to sweep the leg but has to settle for a tie-up. Ostovich shoves off the cage and they’re back at range. Rosa is working her jab, then Ostovich steps in with a combo, both women landing. Ostovich body kick is caught again but no takedown. Rosa hits a knee inside before they break again. Hard to tell who’s winning this slow-paced rd. Rosa landing slightly more, Ostovich harder. Ostovich connects on a right hand then a body kick. They exchange hooks on the inside, and we get pick up in the action at the very end. In round 3, Ostovich comes out aggressive w/ her right hand to start R3. MDLR looks for a takedown but gets shucked off. 3-2 lands for Ostovich, MDLR ties up on the cage. MDLR looks for the takedown but Ostovich swings around to the back, too high, latches onto an arm and threatens an armbar. MDLR manages to extricate herself and she’s on top finally. De La Rosa finished Ostovich with the rear-naked choke.

Luis Pena vs. Richie Smullen is next in a lightweight bout. In round 1, Pena pulls Smullen into a knee early as the pocket closes but gets taken down. Pena wall-walks but Smullen pulls him down again. Pena looks for a weird triangle from an awkward position, soon bails on it, reclaims guard. Smullen is working mild g&p. Pena throws his legs up to create space, gets on top as Smullen goes for a guillotine. Pena pulls out of it and gets up. Pena starts boxing Smullen up. Pena drops Smullen and goes to the ground with him. Smullen looks for a leg but Pena counters by wrapping the neck. After adjusting to position, Pena rolls to mount and gets the tap by guillotine.

John Gunther vs. Allan Zuniga is next in a lightweight bout. In round 1, Gunther is crouched and poking with the jab and soon shoots an ugly shot as Zuniga circles. Gunther has him pressed into the cage and is able to get Zuniga down eventually. Zuniga is looking to wall-walk as Gunther stays stuck to him. Gunther gets a trip but Zuniga gets slowly to his feet again. This is very much not a UFC-level fight. Gunther continues to smother Zuniga against the cage. Zuniga gets to his feet and Gunther trips him. There have been almost no strikes or offense beyond takedowns. Slam for Gunther, Zuniga up again. Gunther finally breaks and hits a spinning back elbow! Zuniga throws a front kick and steps in with a right hand as the horn sounds. In round 2, Zuniga is letting his hands go to start the round and then landing a left hook and a leg kick. Gunther hits a clean right hand before ducking down for a takedown once again. Gunther gets a takedown and climbs on Zuniga’s back but the Costa Rican gets to his feet. The ref breaks them up. Gunther lands a right but Zuniga goes hard to the body with hooks. Gunther lands a pair of right hands then ties up again. Gunther rinse-repeating takedowns. Zuniga looks for a kimura sweep but can’t do anything with it. Gunther on top to end the round. In round 3, Zuniga landing a combination. But the tough Gunther walks through it to tie up and take the fight down once more. Gunther lands another glacial right hand, Zuniga hits his own, Gunther pushes him to the fence again. Gunther got the decision win.

Tyler Diamond vs. Bryce Mitchell in a featherweight bout opens the FOX Sports 1 preliminary bouts. In round 1, The long Mitchell is trying to keep Diamond on the outside. He lands a counter left cross and a side kick to the leg. Diamond sends a pair of head kicks off Mitchell’s guard. Diamond backs Mitchell up but gets tied up. Diamond hits a low single but Mitchell is being active off his back. Diamond gets a little too high after posturing up and gets reversed. Diamond works to his feet and Mitchell looks to take him down so Diamond wraps the neck. Mitchell dumps him and clears the legs. Diamond scrambles to top and they’re soon back to their feet. Diamond attacks with leg kicks. Mitchell ties up and lands a pair of knees to the gut. A front kick strays low on Diamond and we get a break. The pair trade head kicks and power hooks, then Mitchell ducks under in the midst of an exchange for a double. Diamond soon wall-walks to his feet. In round 2, Diamond jabs and then has a leg kick caught. Mitchell is going hard for these takedowns, getting close but not quite finishing them. Diamond reverses position on the fence and gets on top but he’s immediately locked up in a triangle! He’s not giving up, maintaining a little space but he’s eating nasty elbows. Mitchell had that triangle on for a while and Diamond is able to slip out and pass to side control. Diamond is looking to take the back but settles for a ride and hard right hands. Good answer back from Diamond to end the round. In round 3, Mitchell hits a nice pull counter but then eats a return right hand. Mitchell hits a body lock takedown but Diamond pops right up. Diamond hits a double leg and passes to half guard. He lands some ground and pound before Mitchell looks for a kimura sweep but Diamond blocks it, gets a wrestling ride and slams him down as Mitchell gets to his feet. Diamond is grinding from side control. Mitchell gets back to half guard but Diamond is suffocating on top, clearly taking this round. Diamond briefly looked for a crucifix but Mitchell turtles. Diamond is back to a ride and he slams a few knees to the body and some right hands. Mitchell got the decision win.

Matt Bessette vs. Steven Peterson in a featherweight bout finishes off the UFC Fight Pass preliminary card. In round 1, Peterson opens with a flying kick, Bessette ducks under for a takedown and pushes Peterson into the cage. Peterson grabs the neck and jumps guard for the guillotine. Bessette manages to survive an extended squeeze from Peterson, things looking dicey for a moment. Peterson works to his feet and reverses Bessette on the cage. Bessette with a knee to the chin. They jockey for position on the fence and trade knees, Peterson being more active. Bessette goes for a throw but can’t get it. He manages to disengage. A head kick glances off Peterson’s head. Bessette lands several hard punches then another head kick. Don’t think Peterson has a single thought for anything other than how he can hit his opponent as often as possible, but he’s getting tagged up. In round 2, Peterson is going forward to start and he connects on a 1-2 as Bessette tries a body kick. Peterson ties up and is going for a takedown on the cage. Bessette defends the takedown and gets back out to space. Peterson is throwing a ton and landing a few straight punches. Bessette is throwing a bit less, looking for hooks and uppercuts. Peterson shoots in as Bessette gets close to the cage in an exchange. He’s able to drag him down and immediately take the back. He lands a few elbows to the side of the head. In round 3, Peterson comes out throwing immediately and then ties up looking for the takedown again after his success. He settles for a few knees on the cage. Bessette is able to get off the cage but he looks tired and Peterson quickly ties him back up on the cage again. Peterson gets the trip and nearly takes the back again but he slips off the top. Bessette is able to get on top and take Peterson’s back but he too gets too high and slips off. Peterson again jumps right on the back but he gets the body triangle so he stays on this time. Bessette is getting high on four points trying to shake Peterson off the top but the body triangle is keeping him stuck to his back. Peterson isn’t close to finishing, landing short punches from the back. Peterson edged out the decision win.

Opening the UFC Fight Pass prelims is Gerald Meerschaert vs. Oskar Piechota in a middleweight bout. In round 1, Piechota clinching and Meerschaert turns him to the fence but gets tripped to the mat. Piechota right into mount. Piechota cuts to side control and does well to lock up the d’arce as Meerschaert turtles up. Piechota into mount now and he’s hunting for the arm triangle. Piechota doing really well to follow Meerschaert every time he scrambles. Gives just enough space to keep from getting rolled, and then jumps right back into an offensive position. They’re stood up. Huge counter hook lands for Piechota. He’s at his best off his back foot on the feet. Counter left hook as Meerschaert steps in and it dropped him. Piechota on his back under the chin, looking to sink the choke, but Meerschaert shucked the hooks and forced him to give it up. In round 2, Piechota’s going to the lead hook too often Meerschaert has been blocking it and stepping in with his own strikes. Huge leg kicks from Piechota cut him down though. Nice headkick from Meerschaert. He’s holding his own after a really bad first round. Went for a sacrifice throw, and ended up on top after a prolonged scramble. Piechota made a mistake jumping on the guillotine. Piechota definitely looking tired. Big opening for Meerschaert if he can keep pressure on. Meerschaert jumping on the anaconda. That was close. Piechota fought it off, but Meerschaert is all over him landing hard shots as he tries to stand. Piechota getting pieced up. eating big knees. Looking for a chance to counter, but he’s nearly out on his feet. Meerschaert staying calm, going back to the knees. Piechota lands an uppercut, but he’s exhausted, and Meerschaert pulls him to the canvas again to land ground and pound from ride. Meerschaert landing elbows and solid hooks from the back. He’s on the rear-naked choke and it looks really deep. Piechota goes out cold.

Lightweight: Luis Pena def. Richie Smullen by submission (guillotine choke) at 3:32 of Round