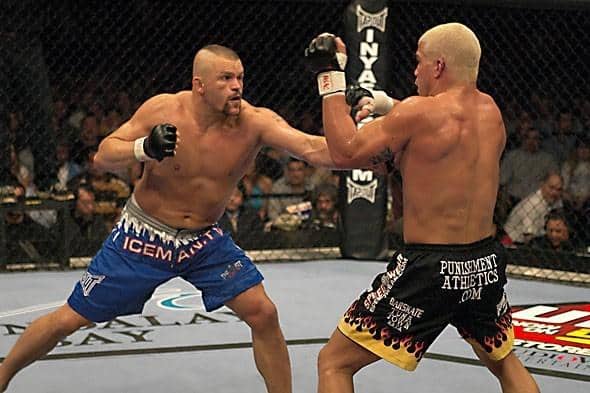 Like many of the rematches on this list, this one between light heavyweight greats Chuck “The Iceman” Liddell and Tito “The Huntington Beach Bad Boy” featured one of the most iconic rivalries in sport history. At one point, the two were friends until Liddell worked his way towards a shot at Ortiz’s then-held 205-pound strap. “The Iceman” then accused Ortiz of ducking him, and the fight was delayed, but the two finally met for the first time at UFC 47 in April 2004 where Liddell smashed Ortiz in the second round with a brutal fight-ending barrage.

“The Huntington Beach Bad Boy” blamed an eye poke for his defeat, and the rivalry only seemed to heighten after the first fight. The rematch was set for UFC 66 in December 2006, and it was even deemed by UFC commentator Mike Goldberg as the ‘biggest’ fight of all-time. Ortiz would end up lasting until the third frame this time, but Liddell once again put him away with strikes.