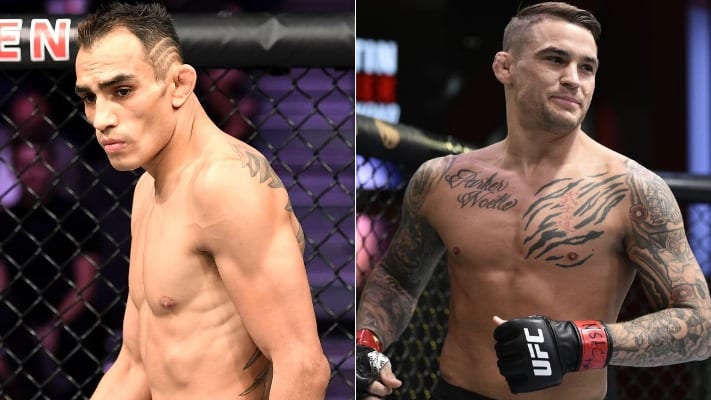 Dustin Poirier may consider himself the uncrowned champion of the lightweight division, but Tony Ferguson begs to differ.

Poirier gave himself the title following his UFC 257 win over Conor McGregor. But with Dana White having yet to remove the actual title from Khabib Nurmagomedov – despite his insistence that he will remain retired – the future of the belt remains in question. While many safely assume that the lightweight championship will be on the line in Poirier’s next bout, it remains unknown who his opponent will be. Ferguson, a former interim champion, feels that his name should be at the top of the list after Poirier avoided a fight with him last year.

“Good Fight But You Dodged Me Kid,” Ferguson wrote in a tweet in response to Poirier. ‘El Cucuy’ and ‘The Diamond’ were in fact rumoured to face each other following Poirier’s win over Dan Hooker. However, Poirier and McGregor would eventually convince the UFC to let them have their rematch, and Ferguson was instead paired against Charles Oliveira at UFC 256. ‘Do Bronx’ would go on to dominate Ferguson over three rounds to run his win-streak to eight, but that obviously hasn’t stopped Ferguson from believing he should have a shot against Poirier. In fact, ‘El Cucuy’ has even offered up his reasoning behind his performance against Oliveira, and how he intends to fix it (H/T BJPenn).

“My crew: No excuses, I fell flat,” Ferguson wrote on Instagram post-fight. “I went out and welcomed the attack instead of defend. The warm up time in the back for UFC hasn’t been the same since pre-covid. Still no excuses, times change and so do people. The time from the hotel to the UFC Apex is much more condensed and the aggressive level we needed was not reached.”

”After the fight, we were checked by doctors and went back to the hotel. I felt it was in order to hit pads and spar immediately because the fight was fresh in my mind and blood circulation in my arm was needed. I really needed to figure out what the F’n problem was from the fight. Solution: Pre-fight time management.”

Regardless of how Ferguson feels, it remains highly unlikely that he will have the chance to square off against Poirier anytime soon. He hasn’t looked at all competitive during his two-fight skid, and fighters such as Oliveira and Michael Chandler have leap-frogged him in the standings. However, if Ferguson is ever able to turn things around and work his way back in to title contention, a fight between him and Poirier is sure to be fireworks.

Do you think Dustin Poirier is dodging Tony Ferguson? Who would win