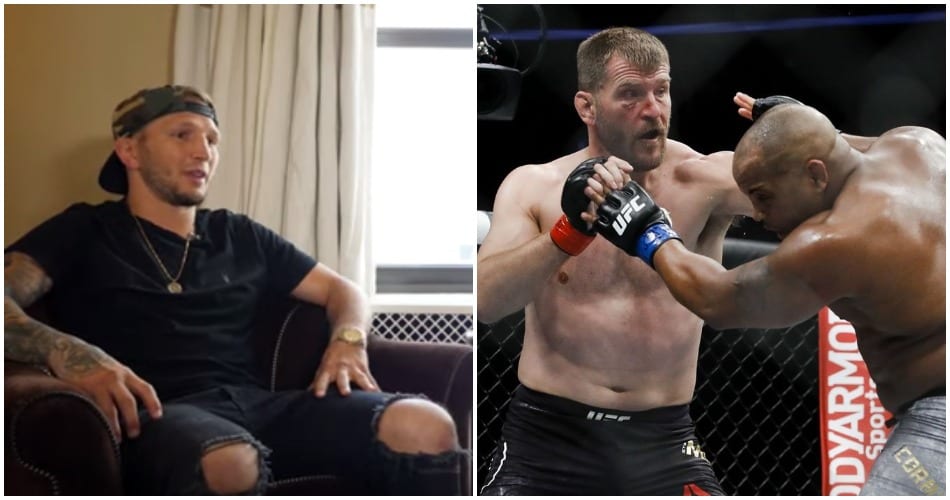 Heavyweight champion Daniel Cormier is the betting favorite going into his UFC 241 rematch with Stipe Miocic. However, TJ Dillashaw is going with the former champion.

Cormier became the heavyweight champion when he knocked out Miocic in the first round of their UFC 226 main event clash last summer. He was then expected to face Brock Lesnar in a super fight, only to no avail. Miocic, meanwhile, was repeatedly calling for a rematch and finally got his wish as the two will collide again at UFC 241 which takes place August 17 in Anaheim, California.

Many feel, given how Cormier was able to knock Miocic out the first time, the rematch will result in “DC” emerging victorious again. However, Dillashaw believes Miocic will be a man on a mission and that his size advantage will be a factor in the fight:

“I think Stipe is going to be someone to reckon with,” Dillashaw said in a recent interview with Chael Sonnen. “He’s going to be coming at him hard. If he [Cormier] wouldn’t have caught him on that break, I don’t know how that fight would have gone in the first time. So, I would pick Stipe in the second fight.

“Cormier is obviously world class throughout wrestling and everything. You can’t ever count him out. But Stipe is so big, stature-wise compared to him, that I just feel like Stipe is going to be too much for him.”

Miocic has had a lot of time to mull over just the third defeat of his professional career, so there’s definitely a chance he will make the appropriate changes and emerge victorious.

If that were the case, one has to wonder what will happen to Cormier’s plans, especially after he recently claimed the fight could be his last. We’ll just have to wait and find out.