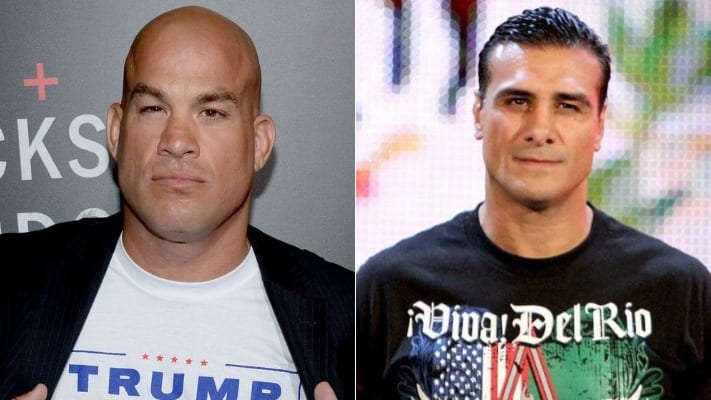 Tito Ortiz’s Combate Americas debut is set. He’ll take on former WWE Champion Alberto Del Rio at a date and location yet to be determined.

The fight will be contested at a catchweight of 210 pounds. Although the location is not set, it will be taking place in the United States. Ortiz spoke to “The Ariel Helwani MMA Show” earlier today (Mon. July 15, 2019) to discuss his matchup with Del Rio.

“The Huntington Beach Bad Boy” first dove into the differences in political views between himself and Del Rio:

“Well, you got to think about this,” Ortiz said. “I’m not into politics, I’m not a politics person. I’m not a Republican, I’m not a Democrat, I’m an American. I want the safety for my children’s future to be number one. And our President is putting that for our country. I want that to happen.

“Now on the opposite side, Alberto Del Rio, he wants open borders. Anybody can come into our country whenever they want, and I don’t believe in that. So I think that’s where we kind of butt heads and I think the story will lead up to the fight.”

Although Del Rio and other professional wrestlers who venture into mixed martial arts (MMA) catch a lot of flack, Ortiz actually has respect for the Mexican star. Del Rio actually holds a professional MMA record of 9-5 and began fighting back in 2001. He has shared the cage with stars such as Mirko Cro Cop.

Ortiz wouldn’t necessarily call Del Rio a friend, but he doesn’t hold any hate for his upcoming opponent the way he did when he fought the likes of Chuck Liddell:

“I wouldn’t say friends,” Ortiz said. “I respect the man, I really respect him. There’s not hate as I had against Chuck Liddell but you never know. I mean, you start talking about people’s countries and you start talking about the future and the safety of our country here in America – I don’t know, I’m willing to die for it. If I wasn’t a fighter I probably would have been a great Marine.”

Finally, Ortiz offered one last warning to Del Rio ahead of their fight later this year:

“Alberto Del Rio, you can watch all my training stuff, and watch how I’m gonna whoop your a**.”

What do you think about Ortiz’s trash talk ahead of his Combate America matchup against Del Rip?