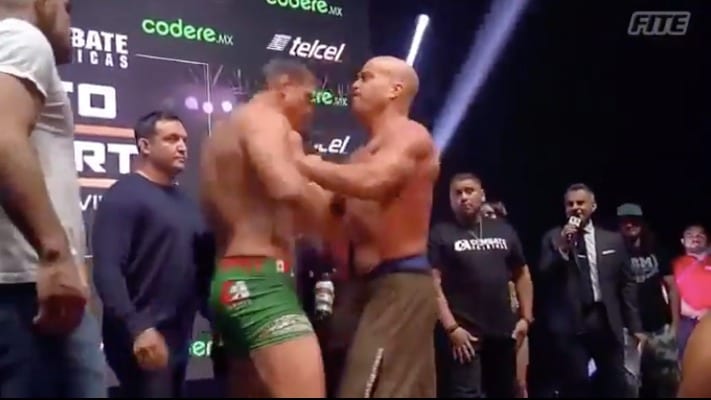 Tito Ortiz and Alberto El Patron certainly do not like one another. The pair will headline Combate Hidalgo tonight (Sat. December 7, 2019) on pay-per-view (PPV).

It will be each man’s first professional mixed martial arts (MMA) fight under the Combate banner. Yesterday, weigh-ins for the event were held in front of the public, with fighters facing off for the final time before fight night. During Ortiz and El Patron’s faceoff, however, things got very physical.

Ortiz shoved El Patron hard, causing quite the skirmish between the two teams on stage. Check out what happened here:

Ortiz hasn’t fought since November of 2018 when he picked up a knockout victory against longtime rival Chuck Liddell, in a widely criticized matchup put on by Oscar De La Hoya’s Golden Boy Promotions. As for El Patron, he has some MMA experience with a record of 9-5, which includes a knockout loss to the legendary Mirko Cro Cop.

In his last outing in 2010, El Patron suffered a second-round TKO loss to Yamamoto Hanshi in Spain, snapping a six-fight win streak. It will be interesting to see how El Patron fares against a former UFC light heavyweight champion in Ortiz after so many years away from the sport.

What do you think about Ortiz and El Patron getting physical at weigh-ins?