LowKickMMA.com
Home UFC News Tim Kennedy On Dan Henderson: His Punches Are Getting As Weak As... 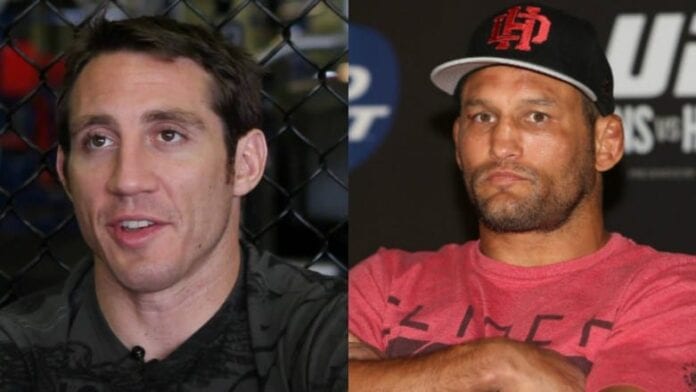 UFC middleweight and Strikeforce veteran Tim Kennedy has been absent from competition for over a year now, since dropping a controversial TKO against Yoel Romero at UFC 178. Recently speaking out about a number of subjects including the Reebok deal and his future as a fighter, we’ve once again started to hear a little more from the entertaining Army sniper. That said, there’s not been any talk about a return fight as of yet.

Dan Henderson has recently been vocal about not wanting to fight Kennedy, and the Army veteran told Submission Radio that he feels ‘Hendo’ knows he is a bad match up for him, especially at this late stage in the former Pride champ’s career. He also had a lot to say about Vitor Belfort in the interview, check out the best bits:

‘I’m a bad match up for Dan (Henderson), he’s not gonna take me down. His wrestling is not good enough to stop my takedowns, and fundamentally I’m a better striker than him. So he really only has one shotm and that’s his big H-bomb, and that’s getting slower and weaker with his age, and is his chin. We are both ‘Go America’ type guys, so that’s not cool to have two guys like that fighting. But I think the foundations of what he was saying is ‘I don’t want to fight Tim, I don’t know how I would beat him besides landing a lucky punch.”

Hendo’s age didn’t hold him back when he blasted Tim Boetsch earlier this year, but there’s a big test ahead of the ageing veteran come November 7 in the form of Vitor Belfort. Having been knocked out spectacularly against ‘The Phenom’ in 2013, there’s much to prove for Henderson in Brazil. As far as Belfort is concerned though, he does not have a fan in Kennedy, who said:

“Belfort has always been a cheater, ever since he was like 19 years old. In fact I think he failed his first steroid when he was 20, that’s crazy. And now he’s old and he’s still cheating, so I don’t know why people are acting surprised (about the alleged UFC 152 failed drug test), I think the biggest story of this is the UFC potentially covered the test results up, that’s the tragedy. There’s no surprise he’s been cheating, the guys been cheating forever. So all you guys that have watched him and said ‘he has all these fantastic knockouts,’ guess what? He’s a cheater, nothings ever changed about him. “

As large a personality as ever, Tim Kennedy also gives the date of his new TV show’s release in the United States. The documentary follows the UFC middleweight around the world as he tracks war criminals, this time armed with a camera crew instead of his trusted Lapau 338 rifle.

He also discusses gun control in the US, terrorists and how if anyone feels threatened by any of the above, they can come stay with the Kennedy family to feel safe.

Enjoy the full interview below, and stay tuned.