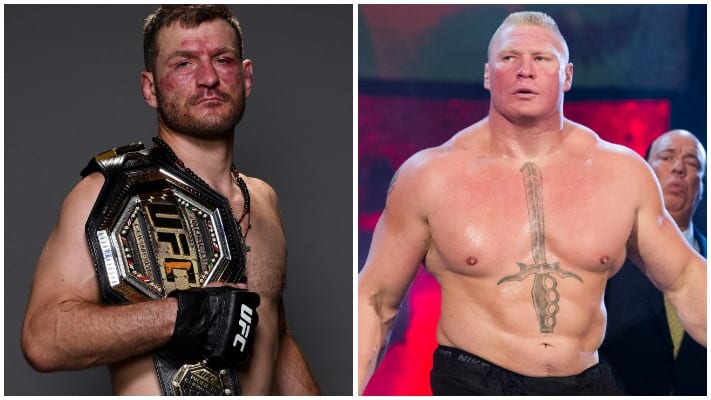 UFC heavyweight king Stipe Miocic says he should get the first refusal on a fight with former heavyweight champion Brock Lesnar who is rumoured to be contemplating a return to MMA after opting against re-signing with the WWE.

Since it was reported Lesnar was a free agent a whole host of elite-level MMA fighters have been calling him out, including the new addition to the UFC  heavyweight division, Jon Jones. Dana White is open to matching Jones against Lesnar if both men want that fight.

“If they both want to fight each other then I’m sure it’s a fight that the fans would want to see. It would be a good introduction to Jones into the heavyweight division. Yeah, if they wanted to do it, I would do it,” White said.

Speaking on the latest episode of Michael Bisping’s Believe You Me podcast Miocic expressed his belief that he, not Jones should get the first crack at Lesnar if he returns.

“A hundred percent I think so,” Miocic said. “Listen, I just think about it more and more I do think 100 percent if anything I would get the Brock Lesnar fight first or be asked first. I didn’t know [Jones] called the shots. I didn’t know that.”

However, it seems very unlikely that Miocic will face Lesnar next. The UFC president has repeatedly assured that Francis Ngannou will get the next title shot after picking up four consecutive first-round finishes against top competition.

Miocic beat Ngannou by unanimous decision in their first meeting at UFC 2020. The 38-year-old explained how he would approach a rematch with the Cameroonian knockout artist, he said.

“I would say you go back to what works but you also understand that he’s gotten a lot better since the last fight, so you’ve also got to incorporate new things,” Miocic said. “That’s the way the game is. Honestly, if you take time off from this sport, people evolve so fast and they get so much better that they’ll leave you behind.

“You take a little bit from the last fight I think. You don’t want to dwell on it because that person’s gotten way better and they’re working on things that you did well against them. I think you do a lot more different things, maybe change it up, the things you were doing. The takedowns, maybe a different setup to get it there, or maybe this time I finish him with a rear-naked instead of laying on top of him like everyone thinks I did.” (Transcribed by MMA Fighting)

Do you want to see Stipe Miocic fight Brock Lesnar?