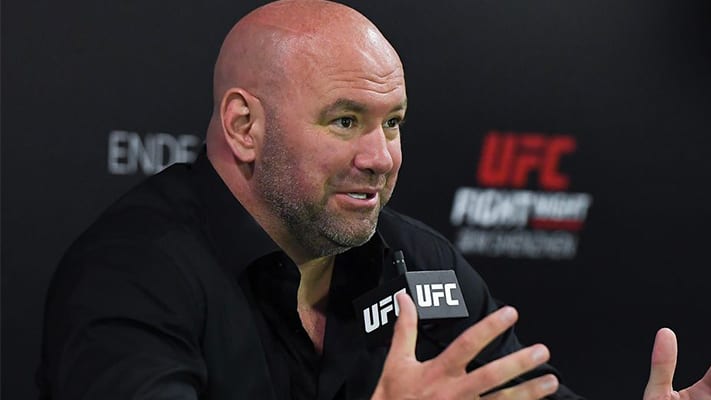 Dana White says he will match Jon Jones against Brock Lesnar if both sides are up for the fight. The UFC president made this comment after news broke that Lesnar is currently a free agent after opting against signing a new deal with the WWE.

Jones who recently announced his intention to compete at heavyweight has already taken to social media to call out the former UFC heavyweight champion, while fans have begun to get excited about the potential super fight.

Earlier in the day, White spoke to TMZ to confirm his willingness to match Jones against Lesnar. Post-fight at the Contender Series, he discussed his thought process in a bit more detail, he said.

“Yeah, I mean, obviously I talked to TMZ about that one today, and I was like listen, if they both want to fight each other then I’m sure it’s a fight that the fans would want to see. It would be a good introduction to Jones into the heavyweight division. Yeah, if they wanted to do it, I would do it,” White said.

White remains unsure of the current position of Lesnar who hasn’t fought in the UFC since facing Mark Hunt at UFC 200.

“He’s 43 years old and he’s got a lot of money. I don’t know what his plans are and how his body feels or any of that. Like I said, I haven’t talked to him. (TMZ) asked me about it because his contract is up and I said if he calls me and he’s interested in fighting, then I would obviously consider making that fight,” White said

“I know nothing (about his contract). I haven’t talked to him. I know nothing about it. TMZ asked me, he’s a free agent, would you make that fight? And I said if they wanted to then I would do it.” (Transcribed by BJPENN.com)

Do you want to see Dana White make Jon Jones vs. Brock Lesnar?