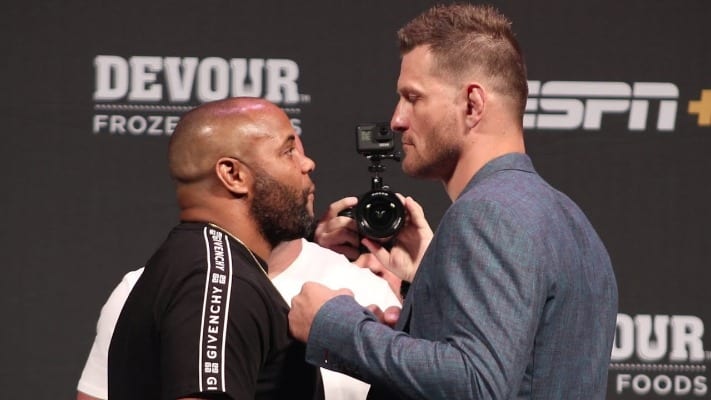 Stipe Miocic and Daniel Cormier will go face-to-face as well as answer questions from the media before their fight.

The pair will compete in a trilogy match for the heavyweight title in the UFC 252 headliner which takes place August 15 in Las Vegas.

It will notably be Cormier’s last-ever fight in mixed martial arts while many believe the winner of the contest has a solid claim of going down as the best heavyweight in UFC history.

To further highlight just how monumental this matchup is, the duo will also be taking part in the first press conference of the pandemic era. It was announced by the UFC’s social media page and will take place August 13.

Although things are a little heated between them, it should be a mostly respectful affair at the press conference.

After all, it’s a rivalry that Cormier appreciates especially compared to his infamous one with Jon Jones.

“I think (this is career defining). We had three fights, and I intend on winning the third fight and the trilogy,” Cormier said recently. “It will be difficult for me to ever be completely free of that rivalry with Jones because it was so big. We sold so much pay-per-view, and the rivalry was so nasty. We were so nasty with each other, and the general public paid attention.

“But competitively this is the one that I love, because I’m fighting a guy that has done and stood for the right things and has competed in the right way. Jones is a fantastic competitor, and I feel like still he brought the best out of me in terms of my preparation. But I believe Stipe Miocic has done the same thing now.”

Who do you think comes out on top in the trilogy?