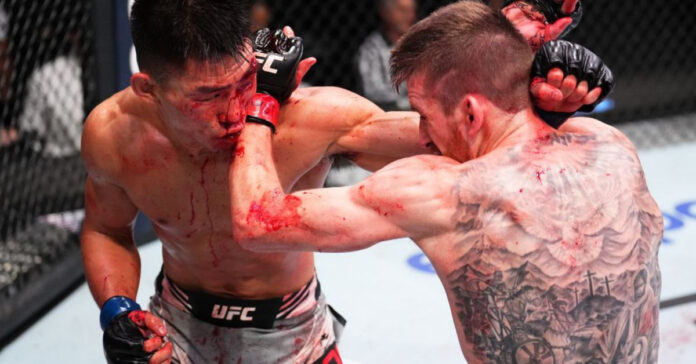 Song Yadong has taken to social media following his TKO loss to Cory Sandhagen in the main event of UFC Vegas 60.

In what was a back-and-forth affair, Cory Sandhagen was able to emerge victorious over Song Yadong in the bantamweight matchup. Sandhagen himself will be looking to return to the octagon before the end of the year following his impressive victory to snap his two-fight losing streak. Yadong on the other hand will be looking to take the necessary time away to heal before making his return to the octagon.

Speaking on his social media the 24-year-old prospect gave credit to his opponent for his performance but promised his fanbase that he will be returning soon enough.

‘So basically couldn’t see anything after the cut. Props to @corysandhagen land that elbow. It wasn’t my night but a good fight. I will be back soon. @ufc #UFCVegas60’

Being at such a young age the Yadong still has plenty of time to develop himself as a fighter and eventually return to continue pushing forward with his title ambitions.

Who should Song Yadong face upon his return?

Whilst Sandhagen has made it clear he is interested in taking on any contenders above him, making special reference to Marlon Vera and Merab Dvalishvili, let us look at what matchups would make sense for the ‘Kung Fu Kid’ to take when he does return.

One potential opponent that Yadong could face upon his return is currently 7th ranked bantamweight Rob Font. Both men will be entering their next bouts coming off the back of defeats and if paired up would provide a very entertaining and fan-friendly matchup.

However, if an opponent who is currently ranked above him is not available then let us entertain the idea that Song Yadong could take on the 12th-ranked veteran Frankie Edgar who is looking for one final matchup before his retirement. A great name for Yadong to potentially add to his resume.

It is unclear just how long Yadong will be side-lined for following his loss, however, fight fans will be excited to see him step back inside the octagon whenever that may be.

Who would you like to see Song Yadong face upon his return?