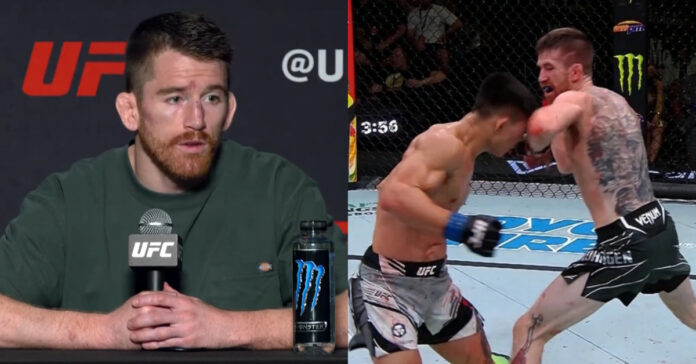 Cory Sandhagen got back to winning ways with a doctor’s stoppage victory over Song Yadong at UFC Vegas 60.

Coming off two straight losses to former title holders TJ Dillashaw and Petr Yan, Sandhagen took on Yadong in the headlining bout of UFC Fight Night 210. Song presented a tough challenge for ‘Sandman,’ and even rocked him during their contest. A slicing up elbow from Sandhagen opened a nasty cut over Yadong’s eye, leading the doctor to call off the fight before the final round.

During the post-fight press conference for UFC Vegas 60, Cory Sandhagen shared his thoughts on his performance. When asked about his plans ahead in terms of a date for return, Sandhagen issued a callout for two of the top-five ranked bantamweight.

“No, not really. I think as a martial artist, I try not to have many opinions about anything,” Sandhagen said. “I live in a way where I just more or less try to go with the flow and that life give me opportunities, and I take them. Chito and Merab are the obvious names. Both of them pose very different challenges, two completely opposite fighters almost. I don’t really care man. Give me one of them for Christmas.”

Sandhagen was ‘pretty hurt’ in the first round

Song started off strong and caught Sandhagen with some powerful shots, one of which wobbled him. Sandhagen detailed how hurt he was in the moment while praising his opponent’s formidable power.

“Pretty hurt. Yeah, he definitely rocked me,” Sandhagen added. “It took me a second to get my wits underneath me. I was seeing blurry for like 30 seconds and then kinda throughout the fight here and there. But, that fight against Yan where I got dropped for the first time helped me get through that moment. I fought through it because I had dealt with it before. Against Yan, I didn’t deal with it as well as I did tonight because I had never been through it and I had been through it now so, I’m happy about that.”

Do you want to see Cory Sandhagen vs. Marlon Vera or Merab Dvalishvili?