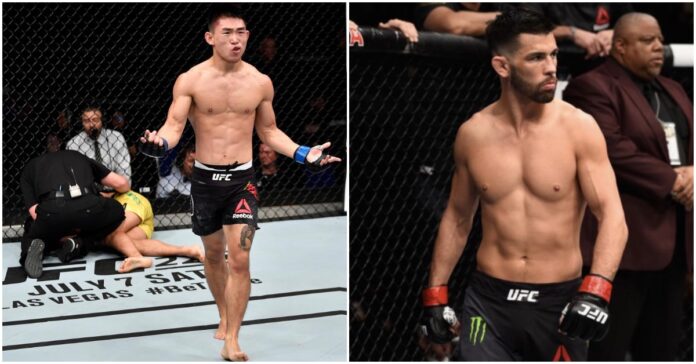 Song Yadong already has his eyes set on another opponent for his next bout, the legendary former bantamweight champion Dominick Cruz.

Yardong was able to earn another second round KO win over Marlon Moraes at UFC Vegas 50. This has been the 24 year olds 11th win in 13 fights. Moraes was a big step up in competition for him and Yadong proved that he belongs with the top dogs of the division. He made quick work of Moraes and was quicker to the punch most of the time.

Yardong also has a win over Marlon ‘Chito’ Vera. Yadong was able to defeat Vera by unanimous decision in May of 2020.

Yadong is only 24 years old, but already has eight wins inside the UFC with only one loss. He is another fantastic fighter, in an already stacked division. The bantamweight division may be the most competitive and deep division in the organization. Yadong was the 14th ranked fighter coming into this bout, but he will most likely leapfrog onto Moraes 10 spot after the win.

“I’ve watched his fights since I was a young kid. I like him very much, I like his style. I’m curios, what about my style (against) his style? What’s going to happen?” Yadong said in his post fight press conference.

A fight between Cruz and Yadong would be a very fun one as both fighters are very fun to watch. Cruz has been on a roll recently as well. ‘The Dominator’ is currently ranked seventh in the division and has won back to back fights against Casey Kenney and Pedro Munhoz. Cruz has also been linked to a possible fight with ‘Sugar’ Sean O’Malley, but it is without doubt his next fight will be a fun one.

The bantamweight division continues to produce fireworks. The depth of that division is mind-boggling at times as fighters like Umar Nurmagomedov aren’t even ranked at the moment. Yadong is just another name that is emerging in a deep pool of fighters.

Would you want to see Yadong fight Cruz?