LowKickMMA.com
Home UFC News Sean Strickland showers with AK-47: “The most f*cking American thing you can... 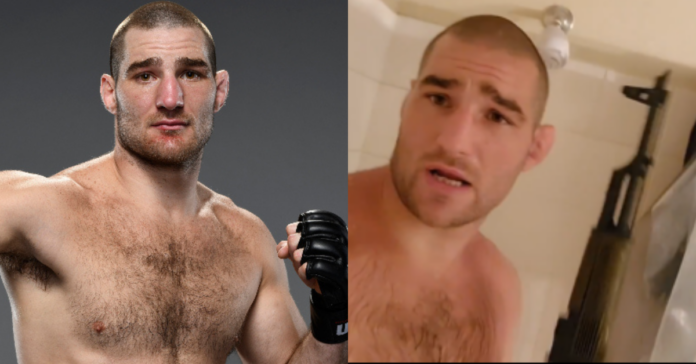 UFC middleweight Sean Strickland has shared a video on Instagram of him showering with an AK-47.

“Lesson number 3 in my “taticool” course. You always… always…. shower with your AK.. she likes to be dirty but not that dirty.”

In the clip, he said:

“I’m going to give you guys some advice. Showering with your AK is the most F*cking American thing you can do. It’s not f*cking weird.”

Which is an ironic thing to say as the AK-47 was developed and originated in the Soviet Union. If one truly wants to show patriotism while they shower with their guns, an M16, developed in the USA, would have been a better choice.

Like many Sean Strickland events, fans were split on whether this was planned humor or if Sean is unwell mentally. According to ‘zmorgan91,’ this event was very on-brand. He said:

“This might be the most Sean Strickland thing I’ve yet to see.”

Dillan Moore questioned the sanity of Strickland, he said:

Sean Strickland is coming off a knockout loss to Brazilian top contender Alex Pereira. ‘Poatan’ will be fighting for a world title at UFC 281. Before his most recent loss, the American-born athlete was on a six-fight win streak with victories over Jack Hermansson, Uriah Hall, and others.